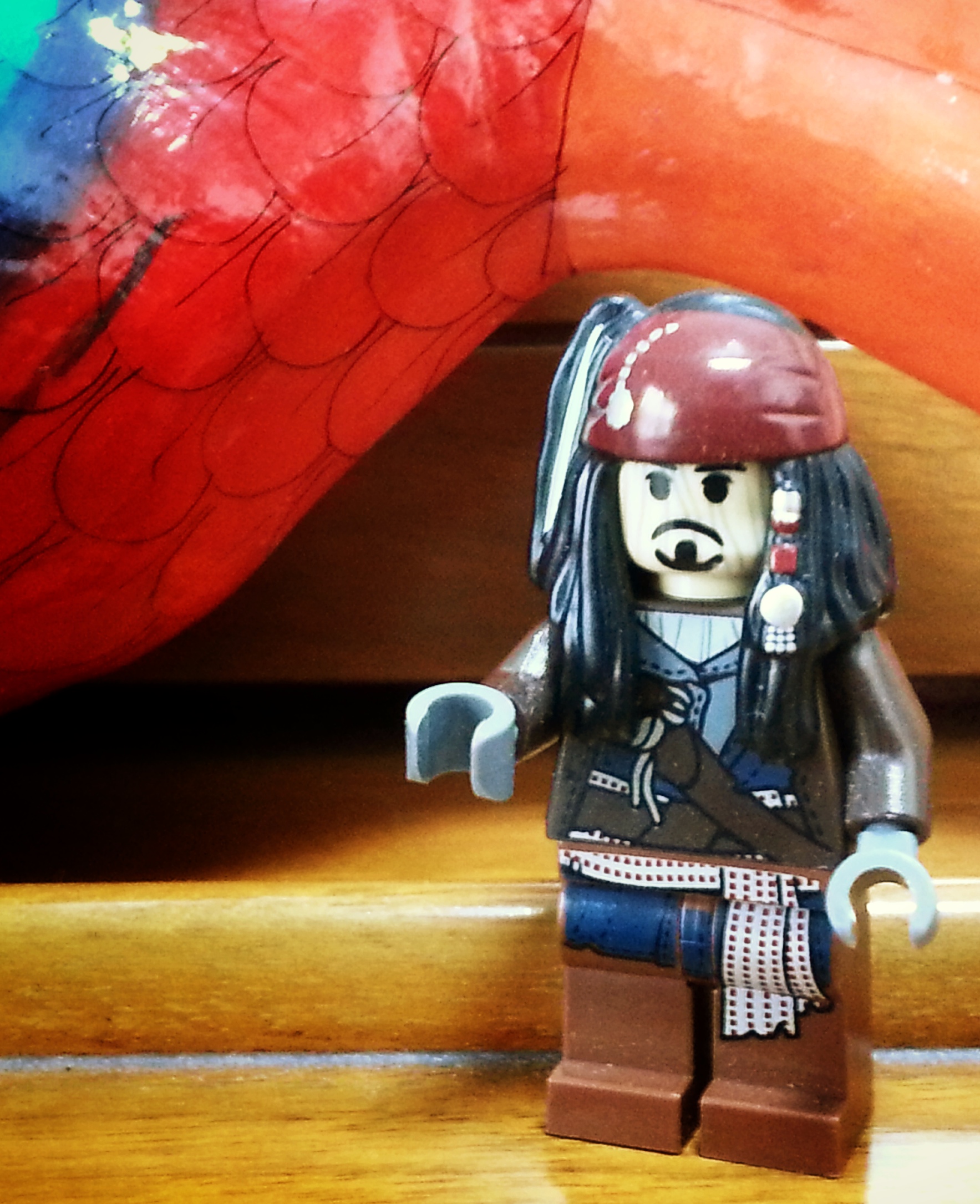 Once upon a time, a friend had a pirate-themed party to celebrate the release of one of the Pirates of the Caribbean movies (Part 17: Captain Grandpa Sparrow versus the Cephalopod of Doom). It was in the middle of the summer, and my mom was in town.

We waited until the day of the gathering to consider our outfits. Digging through closets and rummaging through drawers turned up a remarkable lack of pirate-like clothing, so we all jumped in the car for a Spontaneous Fashion Adventure.

We hit the jackpot at Walmart, where we secured three white poofy shirts in various sizes, because if one thing screams “ARRRRRGH IMMA PIRATE!” it’s a bright white shirt with laces up the front and billowing sleeves.

We returned home to begin assembling our costumes. Everything was going smoothly until my husband decided that his outfit wouldn’t be complete without a small toucan perched on his shoulder.

An hour, a dowel rod, sandpaper, two screws, a drill and vast quantities of Elmer’s glue, wood glue and Super Glue later, we had a completely

On the way to the party, we went over our Master Plan: we’d eat there, and if we were still hungry on the way home we’d head to Double T Diner.

We’d only been at the party for about half an hour when disaster struck. I crouched down to pet the host’s dog, who was evidently not Captain Crowd. The dog, understandably freaked out by having an unknown pirate suddenly appear in his personal space, bit me. In the face. I think the most disarming part of the entire exchange was his apologetic look, “So sorry about this, but…*CHOMP*”

Mildly stunned, I stood back up, hand to my mouth, trying to assess the damage. Was it bad? Did I need medical attention? Would rum help? I played it cool and headed to the bathroom, where we determined that all-in-all it could have been MUCH worse. My jaw ached and I had a single cut just below my lower lip. I grabbed some toilet paper, held it to the wound and rejoined the party.

Someone handed me a glass of punch and I took a sip. As the punch began soaking into my bandage, I realized that it wasn’t actually a cut, it was a PUNCTURE straight through my lip.

About ten minutes later, even I had to admit that, given the fact I hadn’t managed to stop the bleeding yet, it might be time to go to the Emergency Room.

“I don’t want to go to the Emergency Room on a Saturday night,” I argued. “It’s going to be chaos. And I think it’s a full moon. They won’t end up seeing me until Tuesday.”

I lost. We piled into the car and went to the ER.

Dressed as pirates. NOT on Halloween.

They actually took me back quite quickly, probably by virtue of the fact that I was one of three sober people waiting for attention. I texted my husband:

“Take mom to get food. I don’t think she ate much at the party.”

“It’s not like I was in a car accident. I’m fine. Just go get food and come back for me.”

He texted back a photo of the toucan.

He texted back a photo of his butt.

I sat there and held an ice pack to my jaw, which was beginning to swell. There was a flurry of excitement as one guy who’d been in a fight regained consciousness, stood up and fell back over. They moved me into a room, stitched my lip and said I was going to be a little bruised and sore but fine.

I emerged into the waiting room – shirt covered with blood, swollen jaw, ice pack – and we signed some forms and left.

“So, are we going to Double T Diner?” asked mom brightly.

“You can get some soup.”

“Fine. I’ll make a sandwich at the house.”

We went home. I went straight to bed.

The next morning, we went to pick up grandma for our brunch reservations. She approached the van and climbed into the back. “Hi, my darling, you look – WHAT HAPPENED TO YOUR FACE?!”

So we explained, and then went on to a delicious brunch featuring pre-chewed food and mimosa through a straw.