“All Dogs” is a collective term for our pups, first created when we’d return home after an outing to find that no dogs had washed the dishes, or folded the laundry, or mowed the lawn.

“Why do we even pay All Dogs?” we’d exclaim, and as the tails began to wag we’d start laughing and laughing.

Some of the pups you’ll read about here are no longer with us, but their memories burn brightly. While they are missed, we know their spirits live on in the zany antics of their brothers and sisters.

In fact, we’re almost positive that there is a Top Secret All Dog Knowledge Repository hidden somewhere in our house containing wisdom such as The Best Place to Hide a Chew Toy, or The Secrets of the Walk-in Closet, or Pro Tips for Getting Treats. 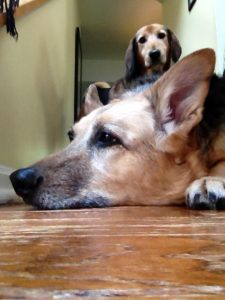 We were fortunate enough to have Sophie the Wonder Dog come into our lives shortly after we moved to Maryland.  We adopted her (or she adopted us, depends on your point of view, really) from a local SPCA.  She is a Millennial dog, born on January 1, 2001.  While she has the coloring of a German Shepherd, she is clearly mixed with other breeds, most likely Sheltie.

Sophie has a lot of personality.  She yodels when she gets excited and groans dramatically whenever she wants a little attention.  One of the first thing she learned as a 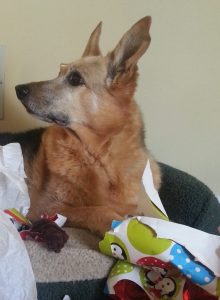 puppy was to ring a bell when she needs to go outside.  While she loves chasing squirrels and bunnies as much as the next dog, she is unique in that, on the rare occasion she catches one, she licks it on the head then toddles away.  Her version of fetch involves running to the ball, picking it up, then running further away and dropping it, after which she gives the thrower a Significant Look and wanders off to lay in the sunshine.

Her hobbies include eating, napping on the sofa, and tricking people into giving her treats. And barking at her brother.

We said farewell to Sophie in 2016. One day I will write more about her. 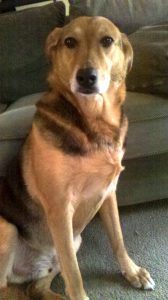 In the summer of 2010, our family expanded to include Indiana (Indy), Adventure Dog. At that time, he was 7 years old. He’s another Shepherd mix (possibly with a little Beagle), and is a very timid yet happy little guy. We’ll often find him cheerfully playing with a toy in a room by himself, throwing it up in the air then pouncing on it and shaking it. He’s also pretty vocal, and will “talk” when he gets excited.  He loves sticks and is the first dog I’ve ever seen try to do reverse crunches while “helping” me exercise.  Don’t ever say “walk” to this dog unless you really, really mean it. Edit:  We had to say goodbye to Indy, Adventure Dog in November 2011.  Miss you, littlest guy.

We welcomed Shiloh, Mischief Dog into the family in April 2012. He’s a 9+ year 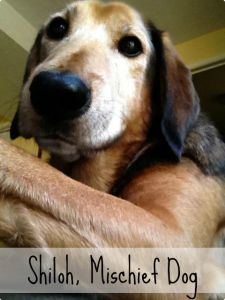 old shepherd hound mix, and quite handsome. He’s from a local rescue, and spent most of his life chained outside to a doghouse.  Despite this, he’s very gentle and waggy and enjoys being around people.  He ADORES Sophie dog, photo-bombing, and Fisher’s Caramel popcorn, kind of in that order. Oh, and eviscerating squeaky toys.

When he was diagnosed with cancer, we were devastated, but with advances in treatments we ended up with two more years with Professor Doctor Dog before we had to say farewell. 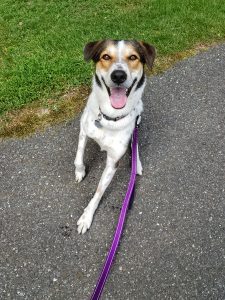 Jimmy came to us from a rescue in Virginia – the same one, in fact, where we found Shiloh. He was almost 2 years old when we adopted him. He’d been rescued from the streets of Kuwait and flown to the US, and his unique appearance and relaxed demeanor charmed us immediately.

He’s a saluki mix, and has a very unusual personality. He’s somewhat aloof, incredibly protective, and very wary of strangers. Our other dogs will give a paw to get your attention, while Jimmy will peck you with his nose, thus earning his nickname “Boops”. We like to say he’s actually a cat that was raised by birds, living in the body of a dog.

You know when a dog does something wrong and looks guilty? Not Jimmy. When being reprimanded, he’ll sit and stare at you like you’ve lost your entire mind, then wander off. We’ve created an entire philosophy around this behavior. 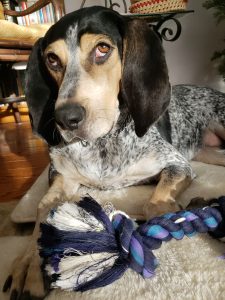 Lulu also found us via Homeward Trails, and she joined our family a little over a year after Jimmy. She’d been moved from a shelter in southern Virginia, and was being fostered when we met her.

She’s a blue tick hound (with just a touch of treeing walker), and is larger than life in every possible way: her bark, her sighs, her attitude, her very presence – every piece of her is simply over-the-top fabulous.

Despite being opposites in practically every possible way, she and Jimmy get along like peas and carrots. 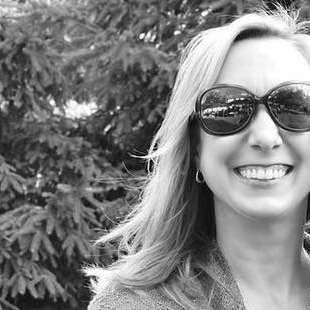