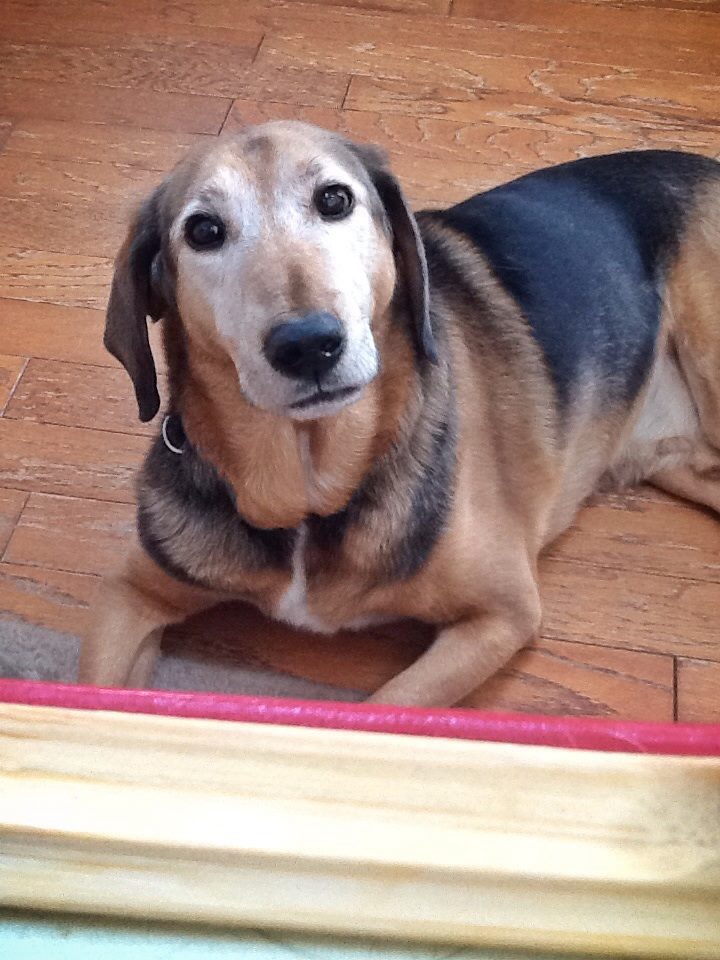 “Mrs. Gomez? This is the vet’s office. We have the results from the biopsy and need to speak with you. Please call us back as soon as you can?”

Considering we’d only gone in on Tuesday and this was Thursday, this was not good news. Generally it takes 7-10 days to get biopsy results back, which means Shiloh’s had been fast-tracked.

We’ve gone to the same vet for years, and they know how much we love our dogs. So as soon as I heard the kind vet tech’s voice on the other end of the line, I knew something was very wrong.

I’d called Monday morning because sweet Shiloh, our rescue hound, had something going on with his mouth. The sides of his face seemed tender, but because he’s had boundary issues since we adopted him a little over three years ago, I wasn’t able to open his mouth wide enough to figure out what was going on.

They gave me an appointment on Tuesday afternoon. Shiloh was rescued from a hoarding situation. He entered our lives at the age of somewhere-between-7-to-9 (depending on which records you believe), having spent much of his life chained to a doghouse in the mountains of West Virginia. There was no fence around his tiny abode, so in addition to facing the elements he was unable to run from threats. I can’t – don’t want to – imagine what he endured, but I am forever grateful to the rescue group who saved him and fostered him until we were able to find and adopt him. When he first joined our family, he didn’t know his name, or the word “toy”, or the word “treat”. He peed on the indoor floor plants one by one, equating greenery with outside. He loathed linoleum, and when forced to walk on it looked like he was channelling Agador Spartacus wearing shoes in Birdcage. He methodically destroyed all of our floor-length blinds in a committed bid to see outside. He counter-surfed, destroyed plush toys by the dozens and ate anything he could find, including half a pound of coffee beans. He feared thunder and lightning and heavy rain.

It took him a week to lay down in the house, and months to stay prone in a room when anyone walked in.

He’s never trusted men, and this includes my husband, who has been nothing but kind, gentle and infinitely patient throughout Shiloh’s years with us. There’s an uneasy peace between them, but Shiloh is ever-wary. Of course, all bets are off in the kitchen, which – in Shiloh’s mind – is The Single Happiest Place on Earth. They bond over treats, and treat time is one of the few times my husband can sneak in a pat or two before Shiloh scoots backwards into the hallway. And yet as I type this, Shiloh is snoring peacefully in the doorway to my office. Since day one he has designated himself my furry sentinel, following me through the house like a shadow and always – ALWAYS – positioning himself between me and any door. No matter which room I’m in – office, living room, closet – he sits, facing outward, back to me, guarding me from dangers only he can see.

Which makes it that much worse that I can’t guard him from this.

I wasn’t sure what to tell the vet tech on Tuesday, so I stuck with the basics: Shiloh’s face seemed tender and I wasn’t able to check inside his mouth to see if things looked okay. He’s always had bad teeth, having chewed the bottom ones to nubs trying to escape his chain in his previous life, and I hoped that this was simply a teeth thing.

Only we’d just had him in a couple of months ago for a dental cleaning.

They took him back to examine him, and soon our vet was pulling me into a room and saying he’d discovered lesions bleeding in the back of Shiloh’s throat, one on each side. They did an emergency procedure to figure out what was happening, sent the lesions for biopsy and returned him to us that night.

Shiloh is resilient. He was interested in food as soon as he got home. You’d never have known he had stitches in the back of his throat.

You’d never have known he has cancer. The second day of soft food did not go well for Shiloh, his nose, his feeding station, the floor, the walls or the small glass table he sneezed on following breakfast. He is a kibble dog, that hound, to the point that he will nose my hand gently whenever I am filling the dog bowls to remind me to sneak him a few extra pieces, which he munches contentedly as a little warm-up before the big event.

We think it’s because of his teeth, which seems completely counterintuitive. Yet he can crunch with his back teeth and has a hard time picking up or nibbling things with his diminished front teeth, so it all makes a weird kind of sense. And it explains why New Kibble Day is an event worth celebrating around these parts. Shiloh has learned exactly two things from his older sister, Sophie The Wonder Dog. One is barking incessantly during playtime. The second, and more notable, is using his keen nose to discover and unmask pills from almost anything – pill pockets, Velveeta, peanut butter, braunschweiger, wet food. This is how I came to develop mad skillz in origami deli ham folding. When it comes to ham, Shiloh knows the pills are there, but he’s content to inhale first and ask questions later.

Later that day I received the message from the vet’s office, and hurried home to return the call.

Later that day is when I learned that my sweet pup has cancer.

So what do you do when you learn your dog has cancer?

First, you sit on the phone with silent tears coursing ceaselessly down your cheeks, jotting down useless words and phrases on a small scrap of paper like that will make some kind of difference: cancer, aggressive, malignant melanomas, prognosis guarded, may not make it to Christmas, not much we can do.

You try to keep your voice steady, but you know you’re not fooling anyone. You thank the vet tech whose unhappy job it was to deliver the news for her kindness, knowing that it must be breaking her heart, too.

You sit and feel the blood drain from your entire body and flow directly into your heart, which is beating faster and faster and seems to be on fire inside your chest. You get lightheaded. You feel like throwing up. You begin to sob like your heart is breaking, because your heart IS breaking, as you slide slowly to the kitchen floor.

And then you are forced to smile when both dogs wander in with the dual purpose of cheering you up and negotiating for treats. You give both dogs treats. You give them treats over and over again because it helps to feel like you are making them happy, that you are able to do this one thing that brings them such joy.

You know that some people will just not get it. “He’s a dog. Dogs don’t live forever. This is what happens when you adopt an older dog.” And then you slowly realize something important: Shiloh doesn’t know he has cancer.

Shiloh knows he still wakes up each morning with his tail wagging as he races downstairs to grab his favorite squeaky toy to cheer on The Making of Doggie Breakfast. He knows to remind everyone when Doggie Dinnertime gets close.

Shiloh knows he enjoys dancing on his back paws to get a sneak peek of what’s in his bowl each day, seconds before it is set down in front of him.

Shiloh knows he loves racing into the backyard with his booming “WooOOOoooOO!,” autumn leaves scattering and floating through the air in his wake.

Shiloh knows he enjoys belly rubs, and snuggling on the couch, and settling down into the office doorway, facing the hallway as he slides into a deep, uncomplicated sleep. He understands that life is life. He is living. He is comfortable. He is happy. He is safe.

And he is loved.

So for now, I will follow my wise dog’s lead. I will see this as an opportunity to fit as much life and love and joy into each day as I can, both for him and for Sophie. And for my family, and for my friends. Because isn’t that what we should be doing anyway? Every single day?

I will race downstairs with him each morning, excited to greet the new day.  I will play with him, and sing to him. I will snuggle with him as I read. I will stop to pet him each time that I see him. And each night, I will lay in bed and allow myself to drift gently into sleep, comforted by the soft sounds of his breathing.

I will do this until we both know that it is time for him to begin his next big adventure, and I will hope that I am brave enough and strong enough to know when that is.

I will be sad later. Because now?

Now is the time for living.