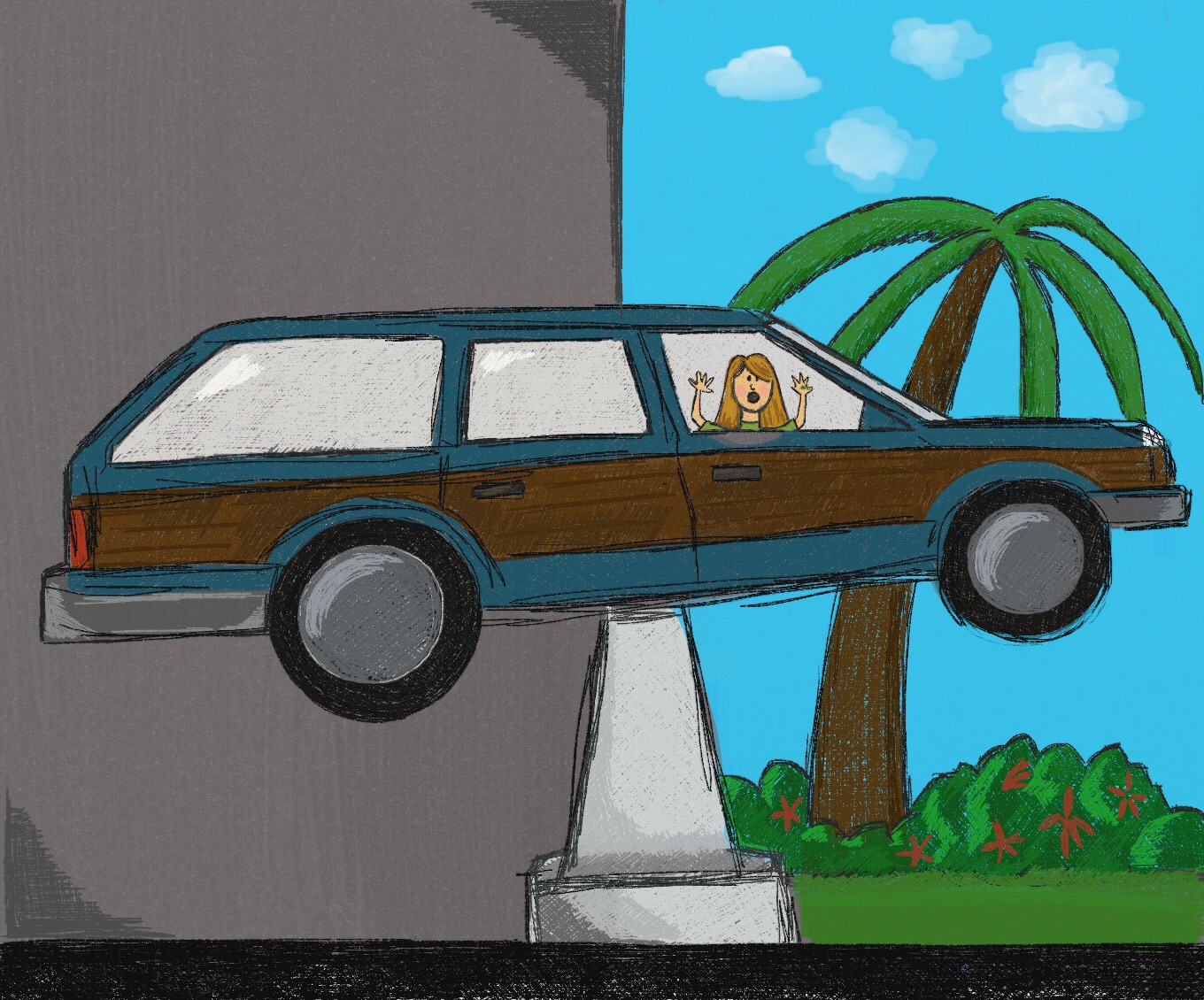 Once upon a time, you had to pay cash to exit parking garages.

That’s it. Cash. No credit cards. No paying ahead and using a little ticket to exit. No tapping a screen with your phone. No app. Just money. And a real person would be sitting there waiting for you to pay, and that person would not raise The Gate of Greater Freedom until you did.

And this is how I found myself with my friend Craig* in his car in the parking garage at Miami International airport desperately scrambling to find the $3 required to exit the lot. We’d just dropped a friend off and returned to the car to the sudden realization that we had a grand total of no money.

I should add that this was also before the age of mobile phones and panic was setting in, because each minute that ticked by meant a looming increase in the total cost.

This was also before the age of reason, it seems, because it never occurred to TWO COLLEGE STUDENTS to actually approach the parking attendant to explain the situation.

Craig was an exchange student from Australia, so I’m not sure that it was technically legal for him to own a car in the United States. And I’m not sure if the car was insured. Or registered. Or whether he had a valid US driver’s license. Details, sure, but ones that become highly relevant once the police get involved.

I’m getting ahead of myself.

The car itself was a once-upon-a-time-blue wood-paneled station wagon with an impressive pedigree that included a gazillion billion miles on the odometer and a top speed of 37mph.

Let me pause here to redirect your mental image from the sexy wood-paneled surf-wagons of the 1950s to the faux-wood vinyl travesties mass produced in the 1980s. You’re welcome.

We searched that car like a crime scene, digging pennies out of the vinyl benches, peering awkwardly under seats and performing unimaginable contortions for a single dime. We searched ashtrays, the glove compartment and even the Way Back. I dumped my purse and scoured the lining. He went through each and every one of his pockets.

After ten minutes of intensive searching, we pooled our findings: 73 cents.

We stared at each other in desperation: we were trapped. We were going to live out the rest of our lives in the parking garage at Miami International Airport. Our families would never know what happened to us. We’d slowly waste away and turn into skeletons, unable to subsist for any meaningful length of time on the single fossilized french fry I discovered while trying to fish a nickel out of the left door panel.

We were, in a word, doomed.

Craig sighed, then started the car. He backed out of the parking space.

“What are you doing?”

He started driving around the bottom level of the garage once, twice, three times. I think I assumed he was looking for a sack of conveniently placed money, not entirely out of the question in Miami in the early 90s.

He ignored me as the car started to slowly gain speed.

“Craig, what are you going to do?”

I sat there, staring at him, desperately trying to figure out what was happening. All of a sudden he narrowed his eyes, clenched his teeth, FLOORED the accelerator and aimed directly for a jersey wall between us and the road.

“YOU HAVE GOT TO BE KIDDING – AIIGGGHHHHH!” I’m not really sure what happened, because my eyes were closed. When I opened them, I discovered the station wagon balanced precariously on the very top of the barrier. We sat there, rocking gently, Craig occasionally hitting the gas and getting nothing because the tires were dangling a couple of feet in the air.

I don’t recall who noticed the Police Substation first. We wobbled forward, then back, forward, then back like the world’s most deranged see-saw and I looked up to see ANOTHER parking garage across the tiny two lane access road, only this one contained an endless line of police cars interspersed with surprised looking police officers, staring at us and pointing.

I waved, because that’s what I do.

“DO YOU NOT HAVE POLICE IN AUSTRALIA?!”

Police officers were running now, jumping into cars and turning keys in ignitions.

The bubble lights turned on – car after car of flashing blue and red.

“You realize we’re going to be arrested, right?!”

And here came the sirens, whooping in dizzying echoes throughout the endless canyons of the parking garages.

We both leaned like our lives depended on it, because let’s be candid, at this point they probably did. I’m not talking about our actual lives – I don’t think we were in danger of being shot (even in Miami, even in the 90s) – but the lives we knew. The ones that didn’t involve clanking chains and judges and gavels and lawyers and orange jumpsuits and a criminal record and deportation.

The car leisurely tilted forward, like we had all the time in the world: Hey, guys! Isn’t this the best? Hanging out in Miami in a parking garage doing incredibly stupid stunts in front of a zillion police officers? We should totally do this more often, right?

It finally hit the pavement in a slow motion event that was the very antithesis of every single television and movie car landing EVER. You know, the ones where the Duke boys jump a raging river in the General Lee and hit the other side – WHAM! – and dirt flies and wheels spin and everybody cheers? Or the scenes from the Fast and the Furious where they manage to drive a car out of an airplane 17 miles above the surface of the earth, smoothly land then jump the Grand Canyon backwards and LAND AGAIN in a swirl of smoke and sand and rocks and – without missing a beat – zoom merrily off into the sunset, radio blaring?

We oozed forward, gently hit the pavement with a teensy tiny poof of dust and rolled to a feeble stop. The silence was broken by a weary pinging noise coming from the engine and the sounds of dozens of jaws simultaneously dropping, categorically amazed by the soaring levels of ridiculousness unfolding right before their eyes.

Craig floored the accelerator, and the car lurched forward like a centipede that had forgotten about its other 98 legs. I fought my instinct to channel my inner Flintstone and shove my feet straight through the floorboards to help power the vehicle forward.

Thus began one of the slowest police chases the city of Miami has ever witnessed: us wheezing down an access road, desperately trying to achieve the speed limit; the police unable to navigate their way out of their parking garage through tears of hysterical laughter. We hit LeJeune Road at about 12 miles per hour, both of us still leaning forward in a vain effort to gain speed.

“OH MY GOD WHAT DO WE DO WE ARE SO SCREWED!”

“I CAN’T EVEN BELIEVE YOU JUST DID THAT WHAT WERE YOU THINKING?!”

“TURN RIGHT AT THAT NEXT STREET.”

“YES, THE ONE WE JUST PASSED.”

“YOU’VE BEEN IN THIS CITY LONGER THAN I HAVE!”

“THEN FREAKING LISTEN WHEN I TELL YOU TO TURN NEXT TIME. TURN HERE!”

Craig made a hard right and immediately slammed on the brakes, because with my spectacular insider knowledge of this neighborhood  – located right next to the school I’d been attending for two years, a neighborhood I’d driven through countless times – I’d instructed him to turn straight into a dead-end alley.

He put the station wagon into park and turned the engine off. My adrenaline rush screeched to a halt and all of the blood drained out of important organs that really needed it. My heart froze. I could barely breathe. My eyes forgot how to produce tears.

“That’s it. We’re going to get arrested.”

I took this opportunity to ask the question that had been preying on my mind.

“What on earth were you thinking?”

A pause as Craig considered his answer.

“You know, I have no idea. I think I just panicked.”

If ever asked to nominate someone for The Most Enormous Understatement in the Entire Universe Award, I know who’s getting my vote.

“Let’s just sit here with our hands up.”

We opened the back of the station wagon and sat there, defeated, arms up, listening to the sirens get closer and closer and then…

Craig and I sat there, slack-jawed, as our futures began to slowly open back up. Gone were the visions of handcuffs and antiseptic smelling hallways and metal bars and ballpoint ink tattooes that said “Free Parking or Bust.” Returning were images of a sun-dappled campus and friends I actually got to choose and learning weird things about cephalopods and FREEDOM, pure and simple.

I vowed to never again enter the car with Craig, starting right after he drove us back to campus.

The obvious lesson here is this: don’t get trapped without money in a parking garage in the 1990s, which should be fairly easy for the 99.9999% of people who don’t own flux capacitors or have access to the TARDIS.

I suppose another lesson is this: it’s probably a good idea to brainstorm for at least 30 seconds before descending directly into panic and doing something completely bizarre and counterintuitive like jumping a jersey wall in front of a gazillion police officers to avoid paying a $3 parking fee.

We could have explained the situation to the Parking Attendant. We could have gone back into the airport to try to find the friend we’d dropped off to see if he had $3. We could have USED A PAYPHONE to call another friend back on campus to come and help. We could have done an almost infinite amount of things, and pretty much EVERY SINGLE ONE OF THEM would have been smarter than jumping that wall.

To this day, I’m still not entirely clear what Craig was thinking. I ended up studying in Australia and I can say with utter certainty that I never once witnessed anyone doing anything similar (although I did once witness a bar fight that I may or may not have accidentally started, which is a story for another time). And so the entire event is shrouded in mystery. And mostly true.

As all of the very best stories invariably are.

*Not his actual name. Like I even needed to type that. But I’ll add that the friend who went through this with me? Unbelievably wonderful. I dedicate this remembrance to him with much fondness and laughter. From the relative safety of a car he isn’t driving.