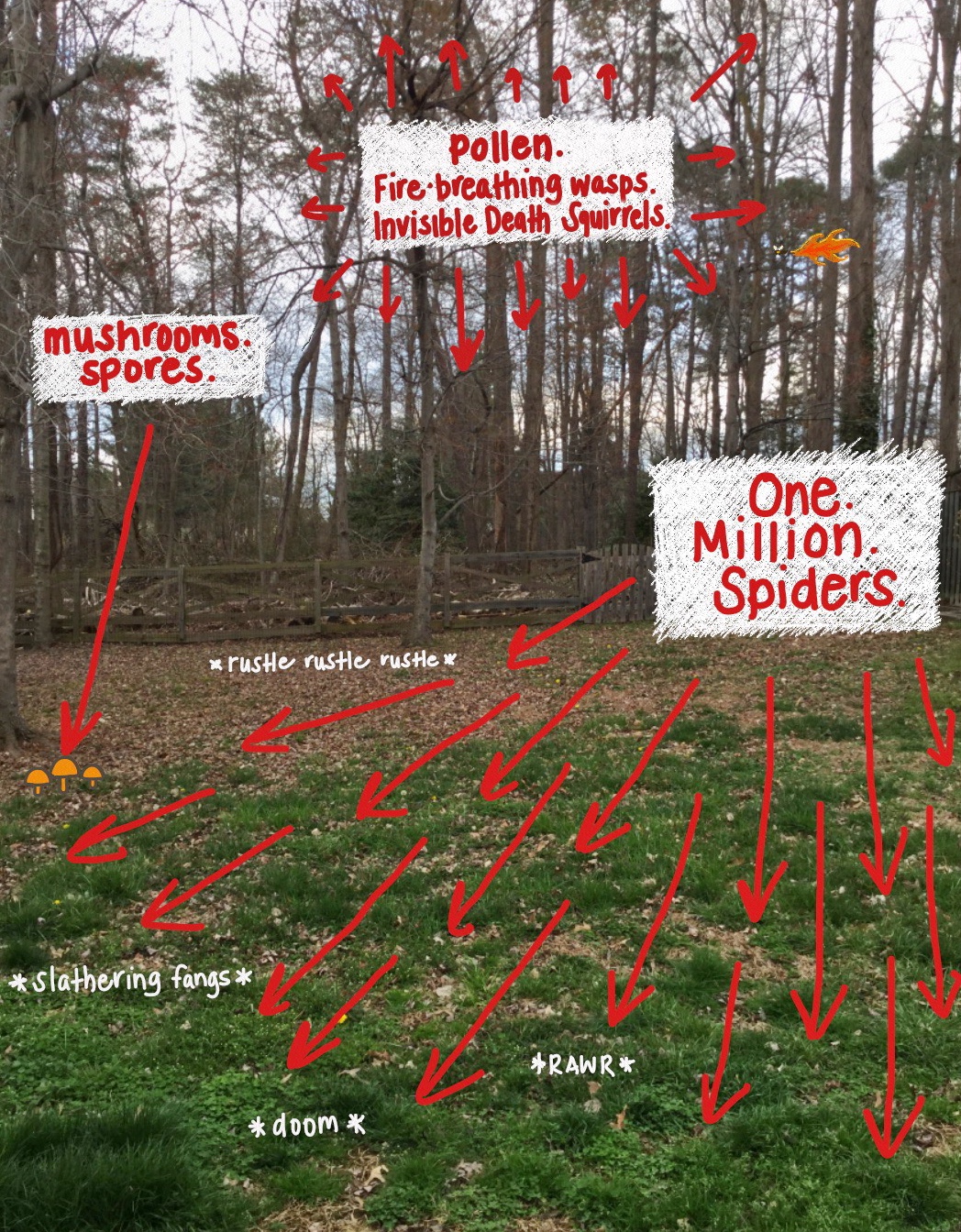 I am not a fan of winter. I’ve never been a fan of  winter. Winter and me? Not friends.

Our relationship became far more fraught once I lived in Miami for over a decade: my mid-Atlantic blood thinned to the point where I’d get cold even in south Florida, something friends from afar wasted zero time in mocking at length.

In my defense, 50°F can feel pretty damned cold if you have no heat at all.

Tired of seeing me stare mournfully through the courtyard window – hair dryer on high-heat pointed towards my extremities – one landlord caved and begrudgingly bought me a fourth-hand space heater that mostly worked and only tried to electrocute me twice.

During my first winter back in Maryland I was convinced I was going to die of exposure.

“But you’re inside the house,” people would argue. Why is everyone so literal? I could barely tell the difference between being inside or outside at that point, anyway, our first home being a barely-insulated rental on the banks of a small river.

I was forced to invent new layers of clothes to wear to avoid hypothermia, often sitting at my computer in a hat and scarves and – much like the snow-suited little brother in A Christmas Story – unable to bend any joints.

Lots of people fear falls during winter, but not me – the padding provided by my now standard winter outfit of seventy-three shirts, sixteen pairs of leggings and three enormous blankets ensures that I’ll barely even notice if I fall over and, if I do and can’t right myself, I’ll have everything I need immediately available for a short nap until help arrives.

The Danish have a word called “hygge” (pronounced hoo-ga, and I dare you to resist the temptation of running through the house chanting it out loud, which I may or may not have done) which means “creating a warm atmosphere and enjoying the good things in life with good people.”

Several sources mentioned that it’s generally associated with coziness in winter, because the Danes are all about making the best out of lengthy durations of darkness and cold. Unless you’re Hamlet.

I think we need to create a word that means “deeply thankful for people who live in places that are dark and cold for large portions of the year so I don’t have to.”

Or maybe a word that means “happy to live in an atmosphere that includes sand, waves and the tropics so people who prefer living in places that are freezing for sustained periods of time can go ahead and do that.”

All winter, I look forward to spring. I dream of spring. I long for spring. And then – FINALLY – spring arrives! Parades! Hats! Tiny blades of grass! Happy flowers!

At which point winter comes back with a vengeance for a few more days, because HOW MANY TIMES DO I HAVE TO TELL YOU, YOU CAN’T TRUST WINTER. And then the warmer weather rolls back in, mostly for good.

And that’s when I suddenly remember all of the things about spring that really aren’t that great when you actually stop to think about them.

For example, this year’s Official First Day of Spring was a bit of a letdown, I’m not going to lie. Dingy, cold, damp, winds – not an impressive start. I don’t mean to be judgy, but you had MONTHS to prepare for the big day, Spring, and you blew it.

The following day, my husband came home from work and was greeted by the Official Welcome Dance of All Dogs punctuated with a short Parade of Squeaky Toy, after which I noticed things turned ominously quiet.

“Hello?” I shouted from upstairs.

“What’s going on down there?”

I ran to the bottom of the stairs and peeked around the living room wall.

“All Dogs let a wasp inside.”

I looked at both dogs, who averted their eyes. Okay, one dog averted his eyes and the other was already snoring.

“Trapped in the office.”

“So when are we setting it on fire? I’ve never liked that room anyway.”

Clearly I am also not a fan of wasps.

I grabbed the dogs, ran upstairs and created a wasp-centric Panic Room, complete with towels around the door-frame and a can of hairspray which – once completely emptied in a jet stream straight onto the wasp – would weigh down its wings and force it to walk. That was the enormously scientific plan, anyway.

Fortunately for everyone concerned I didn’t have to rely on successfully aiming something clearly labeled “DO NOT SPRAY IN EYES” at a tiny flying creature in an enclosed room, as my husband saved the day and (allegedly) ushered the wasp back outside where it went on it’s waspy way without planning vengeance for fifteen generations upon all things Gomez. I hope.

Wrongly assuming the worst was behind me, I decided to brave additional nature by venturing outside to remove a few mushrooms that – using my finely honed scientific training – I’d cautiously identified as “kind of orange”.

Having no clear way to know if they were poisonous or hallucinogenic, I decided it was in everyone’s best interest if I removed them before Shiloh, Mischief Dog staged a taste-test.

Bucket and spade in hand, I crunched through the leaves we’d intentionally left in place to help nourish the lawn (as opposed to OTHER people who are simply too lazy to rake) towards the base of the tree where the mushrooms lived.

They were EVERYWHERE, and some of them were already dying and falling over.

Which meant – as any friendly mycologist could have warned me – that as soon as I touched them they disintegrated into a merciless cloud of spores that magically went right up my nose. I started sneezing, crouched down with one hand on the ground to steady myself, trying desperately to shake the fear that I was about to star in my own real-life version of Bradbury’s “Boys! Raise Giant Mushrooms in Your Cellar!” I sat there and, as I failed to turn into a space alien, began to slowly calm myself down.

That’s when I noticed a soft rustling sound. Only it wasn’t windy and this noise was sustained.

I glanced around, finally settling my gaze on the ground. With eyes slightly unfocused, I began to notice little specks scrambling across the surface of the leaves.

A LOT of little tiny specks. When my eyes focused what I saw was, in fact, A MOVING CARPET OF TINY SPIDERS. The rustling noise was THEIR FEET ON THE LEAVES.

Please take a moment – as long as you need, I’ll wait – to imagine how many spiders combined it would take for you to ACTUALLY HEAR THEIR TINY, COLLECTIVELY-INTELLIGENT AND HIGHLY SINISTER FOOTSTEPS. Pausing to consider that each has four times as many legs as a human only amplifies the horror.

I don’t mean to brag, but I teleported directly into the laundry room, speed-stripped and stuffed every article of clothing I’d ever worn straight into the washing machine and turned it on.

I wished I could crawl into the washing machine, too, but I settled for a 30 minute shower to make sure zero spiders remained anywhere on my body.

Afterwards, it occurred to me that no one was ever going to believe the whole carpet-of-spiders thing without pictures.

“Aw, how cute!,” people would say, “like the baby spiders at the end of Charlotte’s Web!”

Wrong. There were no cute little silk balloons or tiny voices saying “Hi!” and waving cheerfully as they floated off giggling into the breeze. These were Spawn of Aragog with slathering fangs just waiting to rip me to shreds.

These were descendants of Shelob, preparing to cover the backyard in swaths of web and capture me and All Dogs for an early evening snack. They looked chillingly malevolent. I mean, as malevolent as something the size of a pea can look. They definitely looked ill-tempered. Or maybe mildly annoyed.

Or perhaps simply resolute. Look, I was absent the day we covered Arachnid Body Language in Ecology.

Anyway, I gathered my remaining vestiges of courage and went back outside to capture them on video, at which point I discovered that the only thing scarier than a yard covered with zillions of tiny spiders is the same yard, an hour later, with not a single spider in sight.

I may never emerge from my house again, between the wasps and mushrooms and spiders and – now – pollen. So I sit here, sneezing with watery eyes in the face of an imminent spider-and-mushroom invasion thinking, “You know, maybe winter isn’t all that bad. No bugs. No pollen. No weird spores. Fewer arachnids.”

And the extra layers mean that when I fall or run into something, the bruising isn’t as severe.

T.S. Eliot was close, only it’s March you have to watch out for, not April. So I say Carpe Hygge. If anyone needs me, I’ll be in Copenhagen.