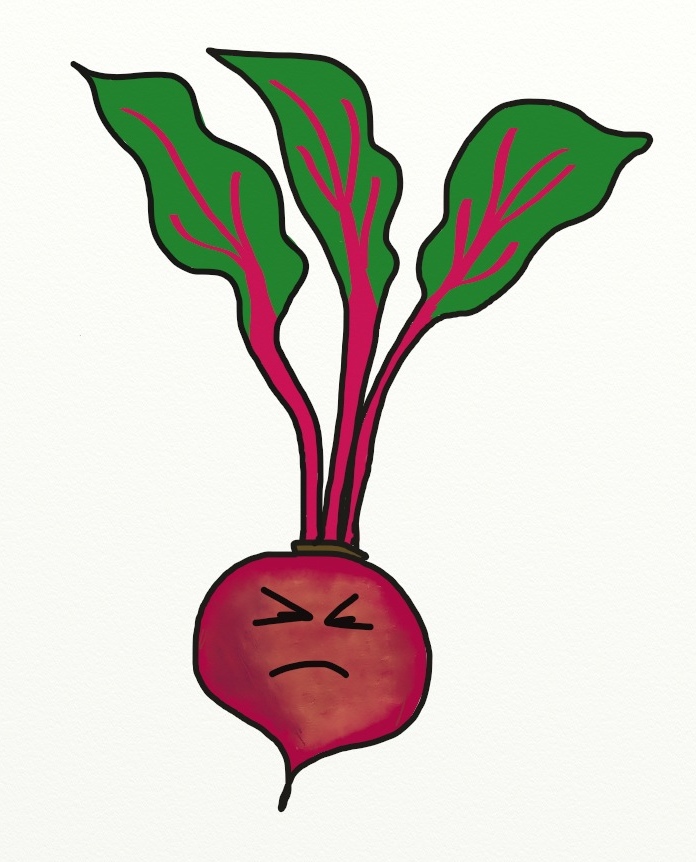 I don’t know if there is an actual medical diagnosis for the irrational fear of beets, but if there is, I have it.

I don’t know when the fear started. I don’t recall being force-fed beets as a child. The only real negative beet-related experience I’ve ever had was in Australia.

The beet is the most intense of vegetables. The radish, admittedly, is more feverish, but the fire of the radish is a cold fire, the fire of discontent not of passion. Tomatoes are lusty enough, yet there runs through tomatoes an undercurrent of frivolity. Beets are deadly serious.”

I’d innocently ordered a burger from a food truck. I knew enough at that point to specify that I didn’t want lettuce, tomato, onion, pickles, carrots, celery, bean sprouts or radishes on it, having been surprised by some or all of these on previous orders.

I received my burger, took a huge bite and started to chew. There was an odd taste I couldn’t quite place. I glanced at the burger and didn’t notice anything right away, so I kept chewing. Then I thought, almost in passing, “That burger patty is kind of enormous.”

The beet is the melancholy vegetable, the one more willing to suffer. You can’t squeeze blood from a turnip…”

Only it wasn’t all burger, it was A GIANT SLICE OF PICKLED BEET on top of a normal sized burger patty. Once this dawned on me I immediately channeled Tom Hanks from Big, dribbling pieces of beet from my mouth and desperately scrubbing my taste buds off with a napkin. There were beet stains on my face and t-shirt. I tried to spit out my own tongue.

The funny thing? I don’t even recall it tasting horrible. But because my mind was not prepared to encounter a pickled beet on a hamburger, my senses betrayed me. From that point on, beets were verboten. I began to specifically order things without beets. “I’d like a strawberry milkshake, please. No beets.” “May I please have the chicken salad sandwich on toast? Hold the beets.”

Just thinking about beets – much less pickled ones – made me break out in a cold sweat.

The beet is the murderer returned to the scene of the crime. The beet is what happens when the cherry finishes with the carrot.”

A few weeks ago, I was at our local farm-stand when what did I see?

I circled the table warily, half-expecting them to leap out of their little bin, wrestle me to the ground and force themselves down my throat. They were pretty crazy looking, too – not washed, really, just caked with dirt and rubber-banded together in groups of three, deep red stems easing into leafy unkept stalks sporting that garden bed-head look all of the hip veggies are going for these days.

I wandered off to glance at the peaches hoping to throw the beets off their game. As I began to make my purchases I said, almost offhand, “Oh, and I’ll take a bunch of the beets.”

Game. Set. Match. As simple as that, I owned beets.

The beet was Rasputin’s favorite vegetable. You could see it in his eyes.” I returned home with the beets. I stared at them. They stared back. I considered various recipes. Finally I did what any self-respecting human does these days to crowd-source a question: I went to Facebook.

“Trying beets for the first time. Terrified. Suggestions?” I received all kinds of answers ranging from roasted beets to beet salad to beets with goat cheese and pistachios. All of the recipes sounded fantastic, and I half wanted to try them except for one simple fact: I honest-to-god felt menaced by a taproot.

One friend suggested borscht. I said that sounded too advanced for my early stage of beet interaction, and she offered to make me some.

I spent the next day avoiding the fridge with complex feelings of mingled guilt and fear.

Then I got a call from my friend, who proceeded to ACTUALLY stop by with homemade borscht. Now the game had gotten serious. I couldn’t NOT try it. Out of respect for the time and effort she’d put into making it for me, I had no choice.

Really. It smelled incredible. There were pieces of beef, potatoes and beets with sour cream mixed in. It smelled hearty and peppery and earthy and wonderful.

The first spoonful was sheer magic. The pieces of beet had the consistency of celery crossed with an onion, and tasted slightly musky, like the smell of soil at night.

I ate two bowls and would’ve gone back for a third but it was already gone – my husband, it seems, also likes borscht.

Yesterday I used a slice of raw beet in a smoothie. I’m still unnerved by how quickly it stains everything, but you have to admire a vegetable that unapologetic about its color.

“Hey, take me or leave me. Whatever. You thought I was an ugly lump of dirt with tangled stalks. Peel me and discover a red so intense no name will touch it, but it’ll haunt your dreams. Oh, and it’ll probably turn your pee pink.”

Forget peaches, Mr. Prufrock: do you dare to eat a beet?

The boxed quotes are taken from Jitterbug Perfume by Tom Robbins, a novel that takes beets VERY seriously.