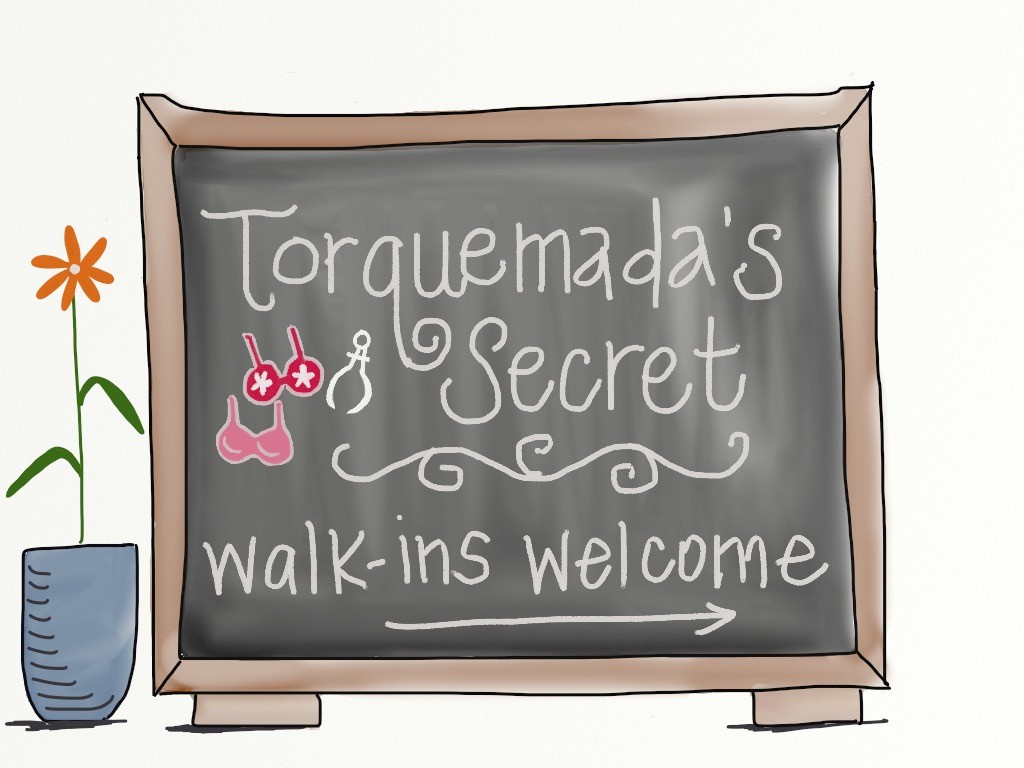 In considering the number of times I’ve been called amply endowed in my life, I’ve come up with the following count: Never.

Don’t misunderstand me – I am totally fine with this. I get into enough trouble as it is without worrying about additional parts of me defying gravity and bouncing all over creation. I don’t have to worry about anything accidentally spilling out of the top of any piece of clothing. I am never accused of Inappropriate Cleavage in workplace settings.

I do have to worry about strapless dresses, but as long as there is no jumping and plenty of double-sided tape, I’ve learned to manage.

For the first time a few weeks ago I visited a boutique bra shop, intrigued by the assertion on the sign outside that I was roughly 1,000% likely to be wearing the wrong size. This was a completely reasonable assumption considering I can never actually remember what size I wear.

I was also curious to see if changing to the correct bra size would make me fluent in six languages, remove the appearance of fine lines and teach me to divide by zero as promised in countless online ads and articles.

Stepping into the shop was weirdly intimidating. There was a lot of distressed wood and iron fixtures and swaths of airy fabrics and hammered metals, like some rustic boudoir decorated by a hipster lumberjack. Everything was eerily quiet. There were roughly ten million bras and undies lurking in artistically shadowed niches. When a woman stepped through a hallway to greet me I almost beaned myself on a decorative sconce. She showed me into a dressing room and I changed into the provided robe, trying not to consider how many other people may have worn it before me. I’m not going to lie – I was a little nervous. Was someone going to leap through the crushed velvet curtains and accost me with calipers and a tape measure?

What actually happened was the sales associate knocked, came in and asked me what size I normally wear. I told her (after checking my bra, because I was totally serious about never remembering my size) and she left, returning a little while later with a selection of bras.

There were ones that were lacy, some that were padded, some with underwire and some without. There was one with straps so complicated that I needed assistance escaping it (because nothing says “sexy” like getting trapped in your own bra). There were bras that seemingly came pre-loaded with existing breasts.

For a long time I was deeply confused about bras, conceptually speaking. I mean, say that I chose a bra so incredibly padded that even under layers of clothing it made me look like early versions of Tomb Raider’s Lara Croft, with breasts so large they each had their own unique zip codes. From what I understood, the goal was to use the overt powers of attraction gifted by such treasures to ultimately find a significant other.

Who would, at some point, discover that the package didn’t follow through with the promise, so to speak. I’d like to think that my engaging personality would ultimately win the day, but I’m pretty sure even that wouldn’t distract from the fact that the promise of cheerful cantaloupes turned out to be peaches. And as for the bras with the water or gel inserts, I could only IMAGINE the reaction if one burst at an inconvenient moment (ie: ever):
“It was really great seeing you.”
*hug*
*sploooooosh*
*look of shock and horror*
“Oops.”
“DID I JUST POP YOUR BREASTS?!”
“No, you’re fine. It’s all good, sorry.”
“WHAT ARE YOU, A CAMEL?”
“Hahaha, no. Although you know, that IS an intriguing idea…”
*blur of motion as other person achieves escape velocity*
“Hello?”

At some point, I had an epiphany: bras are about whatever you want them to be. If you want to wear them to look or feel sexy? Awesome. Want comfort? Go for it. Need one solely for containment purposes? You have options.

Deeply empowered with this new perspective, I selected one and asked if it was available in a different color. The sales associate asked for the size and letter. I glanced at the tag and did a double take.

She came back with the different color, and suddenly I was a victim of the most effective marketing manipulation ever: VANITY SIZING FOR BRAS. I didn’t even CARE what size I normally wear, the thought of owning a bra that said D on it was simply too tempting to ignore. This may be the only bra in the history of the universe that will ever both fit me and feature the letter D immediately following the number on the tag.

So what did I learn? Marketing is wily, but not in the way I originally expected.

Sure, the ads and articles earnestly explaining why you will spontaneously combust (ha!) if you wear the wrong bra size are overly dramatic, at best. And wearing the correct size, while far more comfortable, will not enable you to fly, understand the speech of animals or time travel (although it’s nice to have goals, so please keep trying, bra manufacturers).

The boutique experience was helpful and not even a little bit scary. The prices were reasonable, the selection was fantastic and nary a caliper was to be found.

But the real secret of bra shopping is this: TRY DIFFERENT SIZES despite what you think you know, because evidence suggests that someone, somewhere, is just making them up as they go along. Kind of like the bra industry’s version of a meteorologist (“It could snow or we could get bursts of spontaneous sunshine. And you may want to take a raincoat if you plan to wear the bra with the water inserts.”).

And while I fell for the reverse vanity sizing LIKE A BOSS – despite the fact I really am fine with the size of my non-gravity-defying bosoms – I also ended up with bras that I like. And they fit. AND THEY’RE COMFORTABLE.

Really, I suppose you could say my cups runneth over.