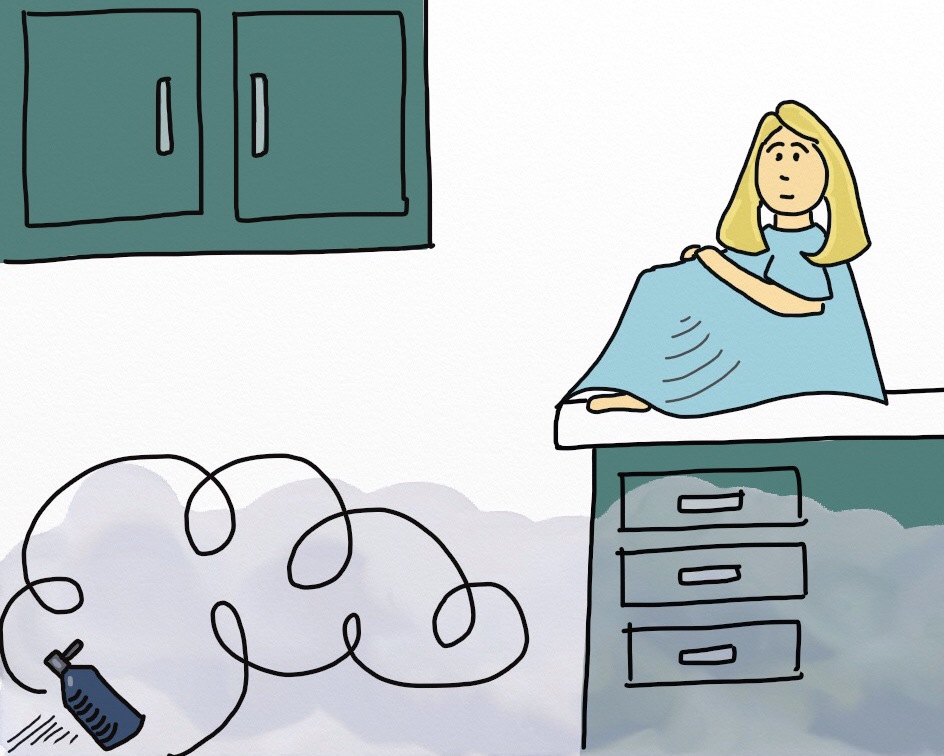 So that’s how I ended up going to see a dermatologist for the first time in my life. I’m not sure how I avoided it for so long – I mean, even my DOG has been to a dermotologist (this is 1,000% true) – but I did. So it was with some trepidation that I made the appointment.

When I was younger, I really did try to use sunscreen. Only there were a few times when it didn’t work. And by “didn’t work” I actually mean “I probably forgot to put it on or, alternately, thought SPF 0 was a completely valid and responsible choice.”

The most sunburned I ever got in my entire life was – ironically – at the beach with my parents. I seem to recall my mom telling me roughly a gazillion times growing up, “Put a shirt on! Don’t burn! Are you wearing sunscreen?” Only not that day. We weren’t allowed in the water because there was a shark parked just offshore, ostensibly waiting for a buffet lunch to present itself, so I fell asleep. For several hours. In direct sunlight.

To this day I’m not sure where my parents were during this episode. I have to assume I wandered off so as not to be tainted by their uncoolness (this was high school – my parents wouldn’t be cool again until my early 20s), because even they would have been hard-pressed to NOT notice my skin begin melting off my back.

I spent the next two days laying on my stomach in bed radiating heat like a small, painful and incredibly remorseful furnace. The gentlest breeze felt like molten sandpaper being dragged across my back. When I began peeling I thought my entire epidermal layer was going to come off at once and I’d end up walking around for weeks as an embarrassed skeleton.

I’d like to pretend that I’m far wiser now, but candidly I just don’t get to the beach as often.

Appointment day arrived. I was sitting on the examination table when the doctor walked in. He actually staggered in, waving his arms a little for balance. He looked like he just graduated from high school earlier that morning, and as he lurched forward to shake my hand he started talking in a high, nervous voice that was the very antithesis of every soothing word ever spoken by Morgan Freeman.

He reminded me of Agador Spartacus wearing shoes.

Don’t get me wrong. I’m fine with young doctors. What I need from my medical care practitioner is a calm demeanor, confidence, and decent control over their appendages. I like to think that this is entirely reasonable, especially from someone potentially doing things to my skin and possibly even my face.

We talked briefly about why I was there, and I pointed out two places I was worried about. After a closer look at one near my hairline, he grabbed a canister from a shelf and immediately power-sprayed liquid nitrogen directly into my forehead. “I’m going to freeze this,” he went on to explain in what may be the worst display of medical timing I’ve personally witnessed. I stared at him, mildly stunned. He put the canister down on a stool and peered closely at the new mini-glacier on my temple. “Looks good,” he decided.

He backed up and dropped onto the stool, causing the canister to fall and begin spraying clouds of liquid nitrogen across the floor until the exam room appeared to be one laser light show away from a dance club. It skittered and rolled as he attempted to subdue it without freezing either his hands or his exposed ankles. Or his face. I quickly pulled my legs onto the exam table and watched, fascinated – for once, I was the safest person in the room.

I was about to suggest that he drop a sheet over it when he made a final desperate grab, which turned out to be successful. I’d like to pretend I didn’t hear him mutter, “That was smooth,” just before instructing a nurse to prepare a needle to numb my side.

Everybody left.
Time passed.
Everyone returned.

The nurse applied several layers of bandage, still maintaining pressure. I’m almost certain she rolled her eyes apologetically at one point. Afterwards I got dressed and waited for the doctor to return to the exam room. Once again, he entered the room as if by accident. Reeling, he finally caught himself with the computer keyboard and began typing.

“Listen, are you happy with your skin?”
“I’m delighted with my skin. Couldn’t be happier.”
Uncertain pause.
“Yay, skin!”
“Because I can give you a prescription to help freshen it up.”
“I don’t even know what that means,” I said, slightly confused and possibly offended.
“Okay, well there’s another procedure I can offer you to minimize the look of fine lines.”
“I LOVE MY LINES. You have no idea how much I love those lines. Woohoo, lines! So do I have skin cancer or not?”
“We’ll know for sure in a few days.”
“Perfect. Can I leave now? Please?”
“I’ll want to see you back in a year.”

So it turns out I didn’t have skin cancer, which is an enormous relief for several reasons, the primary one being that I won’t ever have to see THAT guy again.

I’m beginning to lose a little faith in the medical profession, to be honest. It feels like every time I go in to speak with any specialist they’re trying to sell me an upgrade or to use some strange new procedure or instrument or prescription to fix something I never really considered broken.

I mean, is it weird that I’m fine with my skin the way it is? Can’t doctors wait for patients to ask about procedures to reduce the appearance of fine lines or age spots or faint forehead scars from the occasional curling iron burn? Shouldn’t they be trying to make patients feel better about themselves instead of worse?

I suppose, until that day comes, I’ll just have to be more careful with direct sunlight. And sunscreen. And sharks. And scalpels.

And, perhaps, with my choice of doctors.