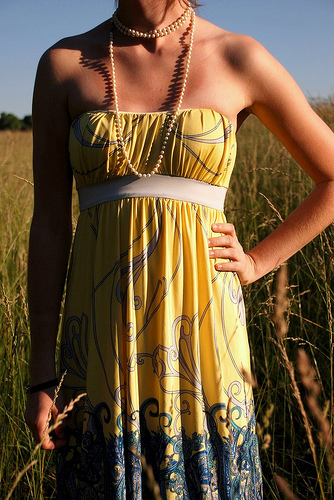 I’m going to be a bridesmaid in my cousin’s wedding.

I’m pretty excited, as you can imagine.  She picked out gorgeous bridesmaid dresses, in direct defiance of tradition.  The fabric doesn’t look like upholstery.  It’s not electric blue.  It doesn’t lace up on the outside like Wonder Woman’s bustier.  It’s fluttery, flattering, a lovely color, and firmly in the “will wear again” category.

There are many phrases that describe me, some of which could even be said in polite company, but the phrase “amply-endowed” is not one of them.  In light of this, I’ve never been a huge fan of strapless anythings, mainly because I am not a huge fan of flashing friends, family, and total strangers as a result of simply exhaling.

Last week I went for my alteration fitting.  I changed and went out to stand next to a bride, who was also getting fitted.  She was covered in swaths of fabric and looked lovely.  I looked like a stick insect in a handkerchief.  The seamstress came out, eyeballed me critically from all angles, put pins up both sides and said, “Okay?”

“I just don’t want it falling off.” I explained.

“You know.” I mimed jumping up and down. “It’s not like I have a lot holding things up.  I was hoping maybe we could just staple it to my body for the ceremony.  Do you think that would work?”

“You’ll be fine.”  She patted my shoulder and left.

The bride had a friend there for moral support.  When I went to schedule the appointment to pick up my dress, she followed me out.

“Excuse me,” she said. “You know, if you’re really worried about it, there are ways for you to… increase the volume.”  She made a spinning motion next to her chest.

“Increase the volume?” I echoed stupidly.

Now I’m not a big fan of Victoria’s Secret, ever since they changed from chamber music, mahogany and brass to neon, excessive pink and club music.  Neon is no one’s friend in a dressing room.

“I appreciate it, but I’d be worried that it wouldn’t work.”  She looked skeptical.  “You know,” I explained, “the dress would still fall down only now I’d have my… increased volume flailing all over the place.”  I made an energetic spinning motion with both arms in front of my chest. “Thanks, though!”

Anyway, here’s hoping I don’t embarrass my cousin at her wedding, ample cleavage or not.

And that the ceremony doesn’t include jumping jacks.  Or excessive gravity.

What do you do when your dog has cancer?

The Perils of Doggie Bath Day