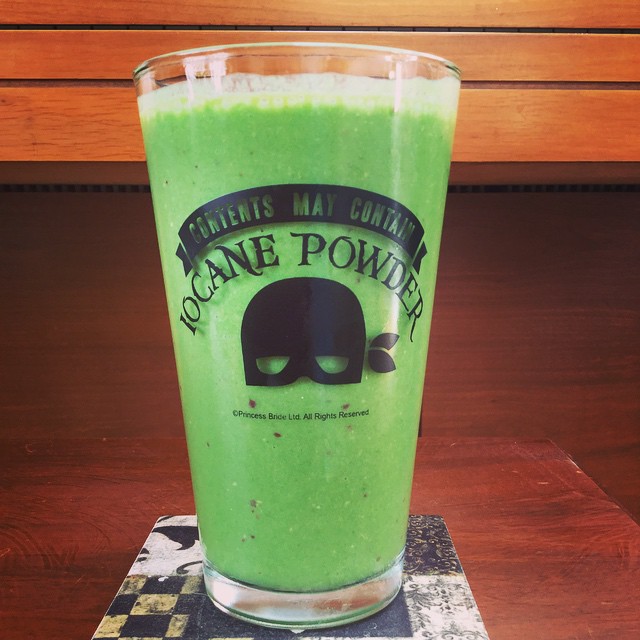 "I spent the last few years building up an immunity to iocane powder. "

Conceptually I am okay with morning, I’d just prefer it to come later in the day. (I’m sure some hilarious person said this long before I did, but chances are right around 1,000% I was sleeping in and missed it.)

I will say that I’ve gotten better at the whole breakfast thing. It used to be a cup of coffee and maybe one of those alleged-nutrition bars. You know, the ones that are the caloric equivalent to 47 Snickers bars but include protein, whole grains and some arcane organic free-range mega-super-fruit recently “discovered” by marketers being paid truckloads of money by some dude whose inheritance consisted solely of an enormous warehouse filled with dried figs.

Also, they cost more than a glass of wine and aren’t nearly as filling or as much fun.

Not that I’m promoting wine as a breakfast drink.

Once I became active on Pinterest, I began experimenting with smoothies. By “experimenting” I actually mean “ended up destroying our old blender to the point that the smoke detector went off,” which meant we had to get a new one.

Buying a new ANYTHING in our house is an adventure. My husband is constitutionally incapable of purchasing even something as mundane as paper clips without exhaustive research: what do the reviews say? What are the benefits of smooth versus patterned? Which ones are made from titanium space polymers? What’s the return policy? Is there a video?

I, on the other hand, research all the way up until I get bored and then generally buy whatever is on the screen in front of me. This takes as many as five minutes and has led to some interesting reveals on Christmas morning.

So my husband began researching.

“Look, honey, this one can CRUSH AN ENTIRE CARROT. You don’t even need to chop it up. You can put it right in with the leafy parts and everything!”

“Why would I need to blend an entire carrot including the leafy parts?”

“They could be poisonous. In fact, you could be setting me up to blend things like entire apples even though we both know the seeds contain arsenic. Is that it? You’re trying to poison me?”

“Do you have any idea how many apple seeds it would take to poison someone?”

The other selling point of this particular model seemed to be that it was featured in Will It Blend?, a series of videos in which it cheerfully reduced items from iPods to Bic lighters down to their molecular components.

“Do we NEED something that can blend a garden hose?”

“You just never know. I mean, I’d hate to need it and not have it.”

So we ended up with a BlendTec, because one day we may need to crush rocks or smelt precious ores using a small kitchen appliance. And when that day comes WE WILL BE READY.

The first morning I used it, I was ridiculously nervous. I mean, this was A LOT OF MONEY to spend on an item I’d used maybe 10 times in my life previously. I carefully placed everything I’d need on the counter. I checked my recipe. I studied the little book to see what setting it needed to be on if I planned to use ice. I scooped and chopped and poured and then – holding my breath – I hit the Smoothie button.

It took several seconds for my brain to process the idea that this sound was most likely not a design feature. I flailed at buttons, trying desperately to turn the machine off.

There was no off button.

How was there no off button?! I cycled through each option, which ended up pulsing, crushing, whipping and emulsifying the contents before I finally decided to just yank the plug from the wall socket.

I looked at the blender. It looked back. Nothing overtly weird appeared to be in the carafe, so with no small amount of trepidation, I removed the lid to peer inside.

A few minutes later I left a voicemail for my husband: “Hi, hon. Sorry to bother you at work. The blender doesn’t work on metal spoons – it only bent it and gave it a few scratches. Thought you’d want to know.”

Look, just because I’m not a morning person doesn’t mean I’m not ALL ABOUT science.

And to be honest, the whole trying-to-blend-a-spoon thing made me a lot more relaxed in my approach to smoothies. I mean, I could basically put almost anything in there and as long as it didn’t contain shards of metal, it would probably not kill me. This has led to enormous successes (nectarine-carrot-ginger-cinnamon smoothie) and abject failures (something something something WAY TOO MUCH SPINACH and also the one that looked like frothy Pepto-Bismol).

Shiloh has NEVER trusted the blender. Ever. And upon reflection I’m thinking it’s because of The Spoon Incident. Or maybe it’s just the noise the blender makes in general. All I know is whenever I so much as move the plastic carafe to begin making ANYTHING he starts barking.

And once I turn the blender on, he Loses His Doggie Mind. He races back and forth from room to room, skidding across hardwood floors accompanied by “WOOOOoooOOOoooOOoooo” sounds, occasionally interrupted when he crashes into large pieces of furniture (or walls) and has to regroup.

Every once in a while I wonder what he knows, like maybe the blender is opening a portal to a demon dimension and only through intensive barking is he keeping the evil spirits at bay. Maybe he Knows Things and is some kind of super canine guardian sent to protect us all from brutal horrors hidden just out of sight. Maybe the blender is sending out a message only he can hear and he’s trying to translate, like a canine version of the numbers in Lost. Unless we figure it out, the world will end.

Or maybe he just has sensitive ears.

I’ve tried adjusting his behavior, and really the only thing that seems to work is carrot sticks, probably because if you bark while chomping a carrot stick you’ll end up aspirating the whole thing, something Shiloh knows only too well through hard-earned experience.

The other morning I decided to make a smoothie. I moved the blender carafe. Shiloh, going instantly from fast asleep to high alert, spun around and crashed directly into the wall. I began doing other kitchen things in an attempt to calm him down for long enough to gather the ingredients: wash a dish, slice up a nectarine. Tidy the counter, get the yogurt from the fridge. I also decided to try to mask the sounds with running water, so I began filling the water pitcher to the side of the sink. When the time came to turn on the blender, I had the carrot sticks ready. No dice – as soon as I hit the button Shiloh freaked out and all I heard was a Doggie Doppler of Woos as he sprinted full-speed through the house.

*thump into the side of the couch*

I flung a carrot into his path. He instantly forgot what he was doing, inhaled the carrot and started chomping contentedly. I sat there petting him as he munched, feeling like The Smartest Human Ever as the blender finished and silence prevailed.

After about thirty seconds, I noticed the gentle, soothing sounds of our infinity fountain. I sat there, lulled by the dulcet music of running water and grinning with my happy dog all they way up until I remembered we don’t own an infinity fountain.

I jumped up, ran into the kitchen and noticed two things:

First, I forgot to turn off the water filling the pitcher, which was overflowing and had spread to cover most of the floor.

Second, as my heel hit the puddle and I began to fall backwards my eyes caught the horrendously ugly wall border I’ve loathed since we moved in. I decided right then that if I didn’t die of the head injury I was surely about to sustain, I’d instead end up dying of embarrassment when the paramedics arrived to cart me to the hospital.

“Wow, did you see that kitchen wall border?”

“Horrifying. I could feel my eyes melting just looking at it.”

“Who designs a border to look like a fake shelf displaying fake fruit?”

“IT WAS HERE WHEN WE BOUGHT THE HOUSE,” I blurted out as I flailed helplessly and – against all hope – grabbed the countertop, lurched to the sink and turned the faucet off.

As you can imagine, it’s been a few days since I tried to make another smoothie.

However, I’ve been amending my product review to mention that, while it can’t crush spoons, this simple kitchen appliance sure can bend them, even while sending secret canine communications AND causing your kitchen floor to be the cleanest it’s been in years.