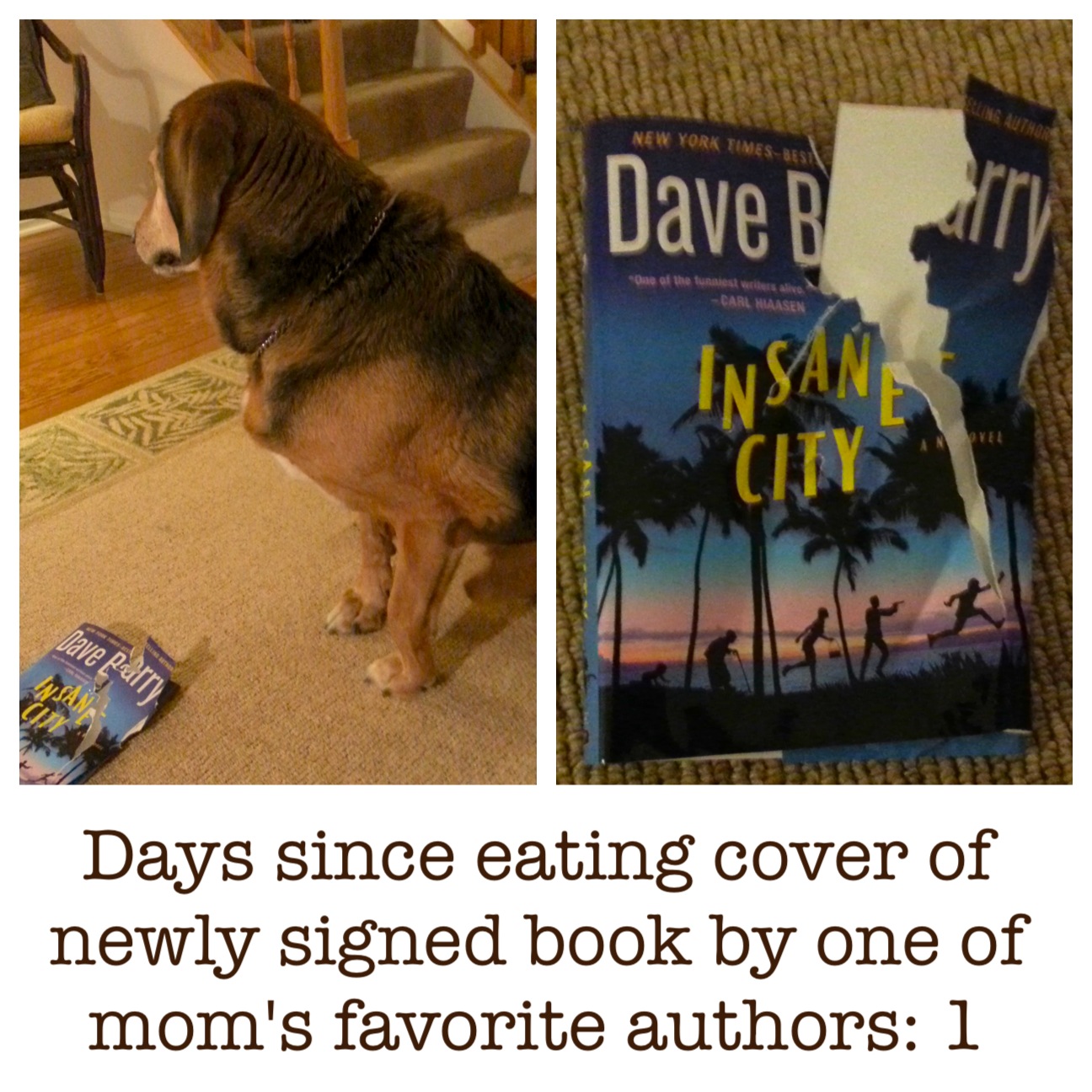 Where to begin? I suppose the most logical place is this: I swear I am not making this up.

I’ve been a fan of yours since I lived in Miami in the 90s. Your ability to sum up the absurdity that is South Florida while maintaining an air of unwavering loyalty always brought a wry smile to my face: It might be crazy, but it’s OUR crazy.

I saw you play as part of the Rock Bottom Remainders one year at the Miami Book Fair. The show was in what appeared to be an abandoned warehouse on not-yet revitalized South Beach. It still ranks as one of the most enthusiastic live performances I’ve personally witnessed. There is no denying that you were having a blast, power strumming chords to that perennial crowd favorite, MacArthur Park. Hahaha – just kidding! It was La Bamba. And possibly Wooly Bully.

I’ve taken part in the Tropic Hunt and the Post Hunt. One of the only overt exhibitions of civic pride I ever witnessed in Miami happened when the crowd united in anger against a team from North Carolina that won the Tropic Hunt one year in Coconut Grove. I’m pretty sure the winners were ferried to an undisclosed location across Biscayne Bay in order to give them a head start in fleeing the city ahead of an aggrieved yet highly motivated mob. Woohoo, Miami!

I proudly (word choice?) performed as part of the Kazoo Processional that led guests to dinner at our local Chamber of Commerce Signature Event the year that you were the Guest Presenter. Let’s just say I am not one of the world’s naturally-gifted kazooers: to this day I have no idea if my cheeks hurt so much afterwards from steadily sustained laughter or from honking out “When the Saints Go Marching In” eighty-seven times in a row.

I’ve read several of your books, most recently Peter and the Starcatchers. I’ve laughed out loud at your columns, especially the Year in Review and the Gift Guide. However, if forced to choose one of your most notable literary achievements, it would have to be the naming of the title character in Naked Came the Manatee: it’s hard to go wrong with a manatee named Booger.

Recently, a friend wrote to tell me that you were coming to Annapolis, Maryland for a book signing of your newly released Insane City. I was excited all the way up until I remembered I’d committed to making a presentation that day, clear on the other side of the state. Even though Maryland isn’t Florida, where travelling across the state can take up to three days depending on traffic in Orlando, it was still enough to prevent me from making the event. My friend magnanimously offered to get a copy of your new book signed for me.

The following Tuesday, I entered my office to discover the book sitting on my chair. I was elated and extremely grateful. Rumors suggest I may have run a celebratory lap around the first floor of the office with the book proudly held over my head.

On Thursday I brought the book home. I took it out of my bag – worried about it getting crushed or torn there – and placed it in the middle of the dining room table. The large dining room table. My husband and I went to dinner and returned less than ninety minutes later to find the book laying open on the floor. The cover had been removed and – how shall I put this? – artfully redesigned by Shiloh, Mischief Dog. He even ate part of it.

Here’s a photo of Shiloh refusing to look at the camera when confronted with the Evidence of the Crime.

Now I don’t mean to start any trouble, but the copy of Stephen King’s Wind Through the Keyhole sat on the same table for several days, untouched. Shiloh also ignored a copy of the Post Magazine, temptingly opened to the column Gene Weingarten wrote for the 2012 Post Hunt. In Shiloh’s defense, we’d only had him for about a month at that point, so it’s entirely possible that he wasn’t yet aware that the table existed.

Even so, I think you’ll agree that the evidence is crystal clear: he loves your writing SO MUCH he decided to eat it. In the words of Maurice Sendak, “I’ll eat you up, I love you so!” He’s a pretty deep dog with what appears to be a rare appreciation of excellent fiction.

It is, however, equally plausible that he loathes your book. Alternately, he may have confused it with a dog treat. Or a plush squeaky toy. He’s kind of difficult to interpret, when you get right down to it.

Sophie, our Main Dog, was appalled by the entire episode. If she had opposable thumbs, she’d waste no time in contacting her congressional representative and formally requesting legislation to reclassify Shiloh as a cat.

The good news? You’re in excellent company. Shiloh has also eaten a paperback  and nibbled the corner of Terry Pratchett’s Nation audiobook cover, both on loan from my the Howard County Library System.

That brings me to my request. No, I do not need you to send me another signed copy of your book. I’d be delighted to buy myself a replacement solely for the cover, or even to enjoy the copy I have sans cover but lovingly drooled upon by my misguided yet well-intentioned rescue dog.

If you happen upon this message and are so inclined, I’d like to ask you to consider helping to promote our local libraries. They are top-notch, but – as with all libraries – there are programs that need support in order to continue. I’ll be raising money this weekend as a Celebrity Bartender during Evening in the Stacks, their annual fundraiser that supports two exceptional programs: A+ Partners in Education and Project Literacy.

And who knows? Maybe one day Shiloh will be ready to take part in their DEAR Program (Dogs Educating and Assisting Readers), in which third graders improve their skills by reading to attentive dogs.

But only if we can keep him from eating the books.

In closing, I’d like to thank you for the laughter. It’s made a world of difference. According to this Alert Reader, at least.

And I swear I’m not making that up, either.