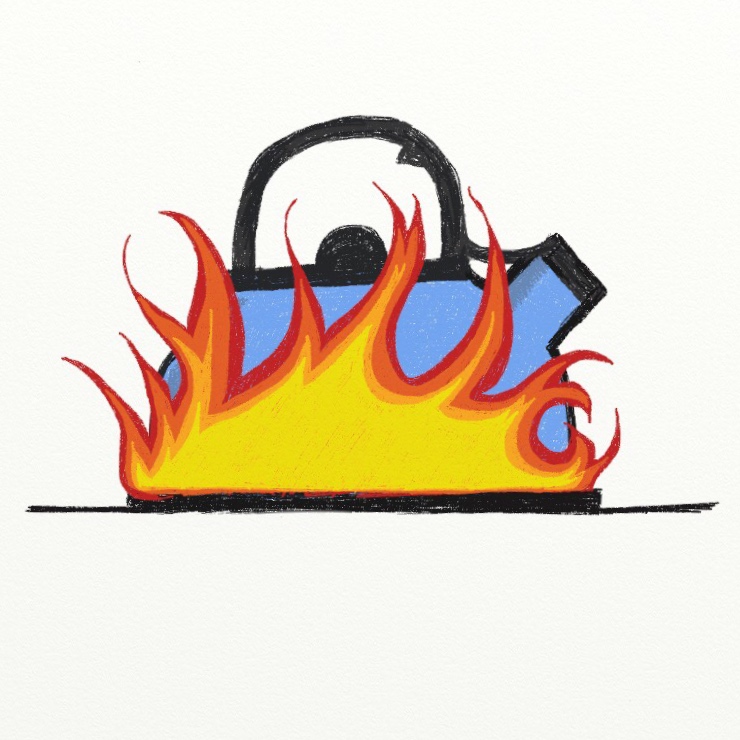 “I’ll put the kettle on for your oatmeal. Don’t forget it!”

That’s how it all started: the flames. The ashes. The soot. The melted metal. The pervasive stench of burnt plastic.

At least that’s what my parents allege. Me? I was blowdrying my hair, getting ready for school, probably half-awake like any remotely reasonable high school senior.

It was the late 80s, so blowdrying hair was as close to a beauty sacrament as there was. You could talk about your shoulder pads, your Forenza sweaters that grew longer with each wear, your waist-high tapered jeans, your shirts buttoned to the very top and accessorized with a “vintage” 1920s pin, but really it was all about gravity-defying hairstyles.

For someone like me, a person who manages to look inexplicably bald with even a full head of hair, the 80s were a bit of a trial. Today the focus is on health and wellness and natural products and cutting out sulfates and sulfites and parabens. In the 80s we’d perm our hair with substances that caused cancer in cockroaches and follow it up with layers and layers and layers of Studio Line extra-alcohol mousse and seventeen gallons of hairspray with added hydrofluorocarbons. We’d have EATEN parabens if it meant a single millimeter of extra volume.

So there I am, aiming my hairdryer on high heat and high power directly at the roots when I suddenly smell something burning. Startled, I drop my accidental blowtorch to the ground and begin beating my head with my hands, convinced I’d finally crossed the line into actually setting my own hair on fire.

Only the smell was getting worse.

Wait. Did dad yell something about oatmeal?

I left the bathroom at a full sprint, fell down the stairs going so fast that I didn’t hit a single step, hooked the bannister at the bottom to redirect my momentum towards the kitchen door and slid in sideways, exactly like Tom Cruise in Risky Business only blonde, female and wearing pants. Also, I don’t remember him smashing into a table and falling over. Maybe they edited that part out. From the floor, I was in the perfect position to see that the stove was on fire. There were leaping flames. There was billowing smoke and a molten core of metal slag that mere minutes before had been a cheerful, light blue teapot innocently boiling water for my instant oatmeal.

The good news is I somehow knew enough to not throw water on a fire on an electric stove. Thanks, high school chemistry! Or maybe middle school home economics. Or perhaps basic common sense. I spent about three seconds wondering if we had a fire extinguisher before reaching for the enormous canister of flour and flinging it all over the kitchen. This is something I’d always kind of wanted to do – dare to dream, people – only whenever I thought of it there was way less fire. Against all odds (my aim was understandably off) enough made it onto the flames and extinguished The Raging Inferno: Stovetop Edition. It also didn’t explode, which I subsequently learned was not outside the realm of possibility. So I had that going for me, which was nice.

Before I could get too excited, I began to focus on what I can only refer to as The Aftermath.

The charred remains of the teapot sat on the burner, listing drunkenly sideways as the melted metal cooled with pings and pops. We never did find the whistling plastic piece – I have to assume it burned away. There was flour EVERYWHERE. Scientist claim that it’s impossible to create matter but they weren’t in my kitchen that morning to see the mounds and drifts and layers of flour covering the stove, the counters, the windows – THE WINDOWS – the walls, the floor. It looked deceptively serene until I took my first step, lost my footing, fell backwards onto the linoleum and was immediately covered in entirely new layers of flour and soot.

With thirty years of retrospect to draw on, I’m *almost* certain that mom and dad wouldn’t have actually killed me. Let’s call it 98% sure. Fine, maybe 97%. But at that specific moment I was a million percent sure I wasn’t going to make it another day (SPOILER ALERT: I LIVED). I mean, who lets a whistling teapot BOIL DRY AND CATCH ON FIRE? That was taking the irresponsible teenager game to a whole new level.

Remember the paste we made (and some children ate. I’ve heard.) in kindergarten? That mixture of flour and water and held together two pieces of construction paper for roughly twelve seconds, making us feel like tiny magicians? This was something completely different. Maybe there’d been significant technological advances in flour (“Now with MORE powdered super glue!”) but I’m here to tell you that using water to clean that kitchen resulted in Human Fly Paper.

I was on the verge of threading the garden hose through the dining room window when I paused to lift the cooling remains of the teapot from the front burner. Only the entire bottom stayed behind. I stood there, gaping stupidly at the top of the kettle. It resembled a charred chrysalis left behind by an insect way too smart to stick around to see how the rest of this disaster was going to play out. I started picking and peeling pieces from the burner with a pair of tongs: sliver by sliver, speck by speck, molecule by molecule. Pick pick pick. Peel peel peel.

Forget minutes. Ignore hours. Never mind years: this was going to take decades, possibly even CENTURIES to clean up.

That’s when I realized I needed an accomplice. This was before the days of cell phones (NO, YOU’RE OLD.), so my options – given that school had already started at this point – were extremely limited. Even so, the person I called would have made the top three even if school were out: I called my friend Daniel’s mom.

“Uh. Mrs. Corcoran? Hi. It’s Mickey. What? No everything’s fine. It’s fine. I’m fine. Nothing’s wrong. Why am I not in school? So that’s a funny story. I kind of set the kitchen on fire a little bit. No really, just a little. Also I may have destroyed the stove. Well, yes, now that you mention it I could probably use a little help, thanks.”

She was there within five minutes, because she lived just a few doors down and because I’ve always secretly suspected she could teleport.

I’ll give her credit, she expressed delight that I was okay and sheer wonder at the mess I’d created. You could always count on Mrs. C. to take everything in stride and make the best of it. She glanced at the burner and made the single wisest suggestion I’ve ever heard: “Why don’t you just buy a replacement element?”

GENIUS. I even worked part time at a hardware store. This was going to be a cinch. We’d finish cleaning and I’d take the element with me and…

And the element wouldn’t move. MY PARENTS BOUGHT A STOVE WITH NON-REMOVABLE ELEMENTS.

“Oh my god oh my god oh my god I’M GONNA HAVE TO BUY A WHOLE NEW STOVE WHERE AM I GOING TO GET THAT KIND OF MONEY I CAN BARELY AFFORD GAS BUT THAT’S OKAY BECAUSE I’LL NEED TO SELL MY CAR ANYWAY AND PROBABLY MY SPLEEN ARE SPLEENS IMPORTANT I AM SO DOOMED.”

I turned around to find Mrs. C. with her head shoved inside the oven, which threw me off for several seconds until I realized she was calling out the digits for the customer phone service number which was curiously located INSIDE THE OVEN.

People, I’m not kidding when I say the 80s were hard core. This manufacturer did not want you to call unless it was really, REALLY important. And they absolutely didn’t want to hear from you if you weren’t able to stick your head in the oven to retrieve their number.

Because I was in a state of panic, Mrs. C. kindly took the receiver and had a spirited discussion with the consumer relations specialist, both of them ultimately agreeing that the overall stovetop design was incredibly flawed. I wondered aloud if it was so flawed that they might just give me a new stove, but evidently it wasn’t quite THAT flawed and we were left to come up with Plan B.

As plans go, B wasn’t bad – we ended up slowly heating the remaining metal and scraping it off with old wooden spoons. It worked surprisingly well and offered the extra bonus of covering the acrid, caustic smell of burning plastic with the far friendlier smell of burning wood.

I made it to school in time to run into my first period teacher just as that class ended.

“Michael-Anne, where were you for first period? You know you missed a test? What’s that on your face?” Mrs. Jefferson tossed questions into conversations like confetti. By the time you realized she actually wanted an answer, she was three sentences ahead and increasing her lead by the second.

“Mrs. Jefferson, I just spent two hours cleaning up after a kitchen fire.”

“No, because it happened after my parents left for work. Also, I’d prefer that they not know about it.”

“You set your kitchen on fire and you don’t think your parents will notice? You know, that might be the worst story I’ve ever heard? I’ll see you at lunch to make-up the test? And that ridiculous soot on your face? Clean it off. You’re not fooling anyone.”

Once school ended, I drove to six different stores in search of the perfect match to the recently immolated teapot (“No, lighter blue. I think the accent color was black. No, no stainless steel. It definitely didn’t have a pattern. NO, I CAN’T BRING THE OLD ONE IN, IT’S A CHARCOAL BRIQUETTE.”), finally emerging with one that seemed to be as close to a perfect match as I was going to get.

“Okay, teapot, it’s you and me, buddy. This all depends on you acting like you’ve been in our house and living on our stove for years. Can you do it? CAN I COUNT ON YOU?!” You know it’s been a long day when you’re giving a pep talk to a teapot.

I raced home, opened the windows again to try to air the place out, and gently placed the new teapot on the IMMOVABLE HEATING ELEMENT FROM HELL, and waited for my parents to get home. I didn’t even put a sweater on, figuring hypothermia was the least I deserved for almost burning down the house.

As soon as I heard my parents drive up, I slammed the windows and ran up to my room, shivering.

“Does it seem cold in here to you?”

“And is that burnt plastic? We’d better call the electrician.”

Their voices wafted up the stairs to circle my head in a whole new cloud, this one of guilt. Now I had to decide if I wanted to come clean or let them call an electrician, which would cost who knew how much money. I slowly started down the stairs.