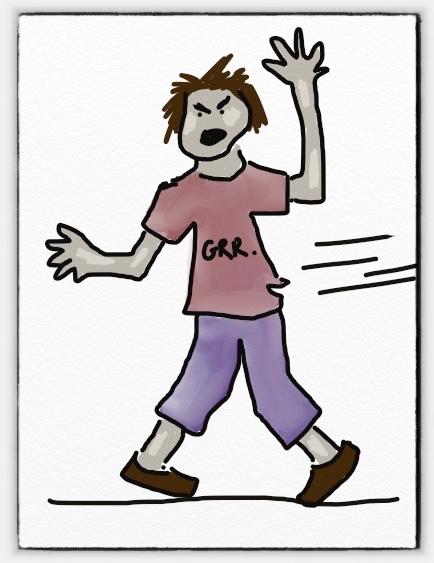 Three seasons into it, I just started watching The Walking Dead. I adore the films of Frank Darabont – you may know him as the director of The Shawshank Redemption, the one movie that makes almost every single person I’ve ever known’s top list of all-time favorite movies.

“The Manchurian Candidate and Shawshank.”

It’s pretty remarkable. He also directed The Green Mile and The Mist. All three are adaptations of Stephen King stories, which is notable because King is one hell of a storyteller. Darabont’s extraordinary skill at bringing these tales to life lies not in the element of horror, but rather the element of humanity – strength, weakness, kindness, wit, nobility, frailty, good and evil – that he portrays so beautifully.

So basically I’m a fan.

Which is why I have NO IDEA why I didn’t start watching the series when it first came out. Was I living under a rock?

I continued on, blithely ignoring season two. Yes, Frank Darabont left prior to that season’s beginning, but one has to imagine he left a great foundation to build upon. And it’s based upon a series of graphic novels by Robert Kirkman, Tony Moore and Charlie Adlard.

While not a fan of zombies per se, I do appreciate creative premises. Something unique and different and intriguing. Something, let me be honest, that is the diametric opposite of Honey Boo Boo.

The other night, I watched Facebook EXPLODE (not literally, I hasten to add) with posts about the season 3 premier.

“Self,” I said to myself, “Could we be missing something here? It appears that an amazingly diverse array of people we know on Facebook are watching and enjoying this series that, for all intents and purposes, could have been written with us in mind. Also? We’re talking to ourselves again, and we’re doing it in the plural. We’re either royalty or should begin to get really worried.”

What can I say? I’m very honest when talking to myself.

So we got the first two seasons and started watching. Here is a picture of me 10 minutes into the first episode:

One of the stories I read about why Darabont left the series was struggles over the high costs of production. Based upon my reaction, he could’ve simply recorded the sound and released the whole thing as a radio series. My eyes were SEALED shut. I wasn’t even peeking through my fingers.

Okay, maybe I peeked a little.

We ended up watching episode after episode, spellbound, straight through to the end of season one.

I’m not going to give away any spoilers (and PLEASE don’t do so in the comments, thank you kindly). I did jot down several observations that I feel are general enough to squeak by without revealing the entire plot.

And the most important lesson of them all? The dead can walk a LOT faster than you think. I know I’m not the sportiest of all Sporty Spices, but I do feel that I’m in decent physical condition. The thought that a creature missing half its face, part of an arm and several internal organs shuffling along on a BACKWARDS LEG fast enough to catch me and rip my face off is demoralizing, to say the very least. I’d argue that the show should be called the Walking-Faster-Than-You-Think Dead, or the Jogging Dead, or perhaps even the Eight-Minute-Mile Dead.

We started in on season two already, but I’ll save that for another post. Suffice to say, I’ll be watching the rest.

And quietly training to run a mile in under eight minutes. Just in case.

You Say You Want a Resolution?