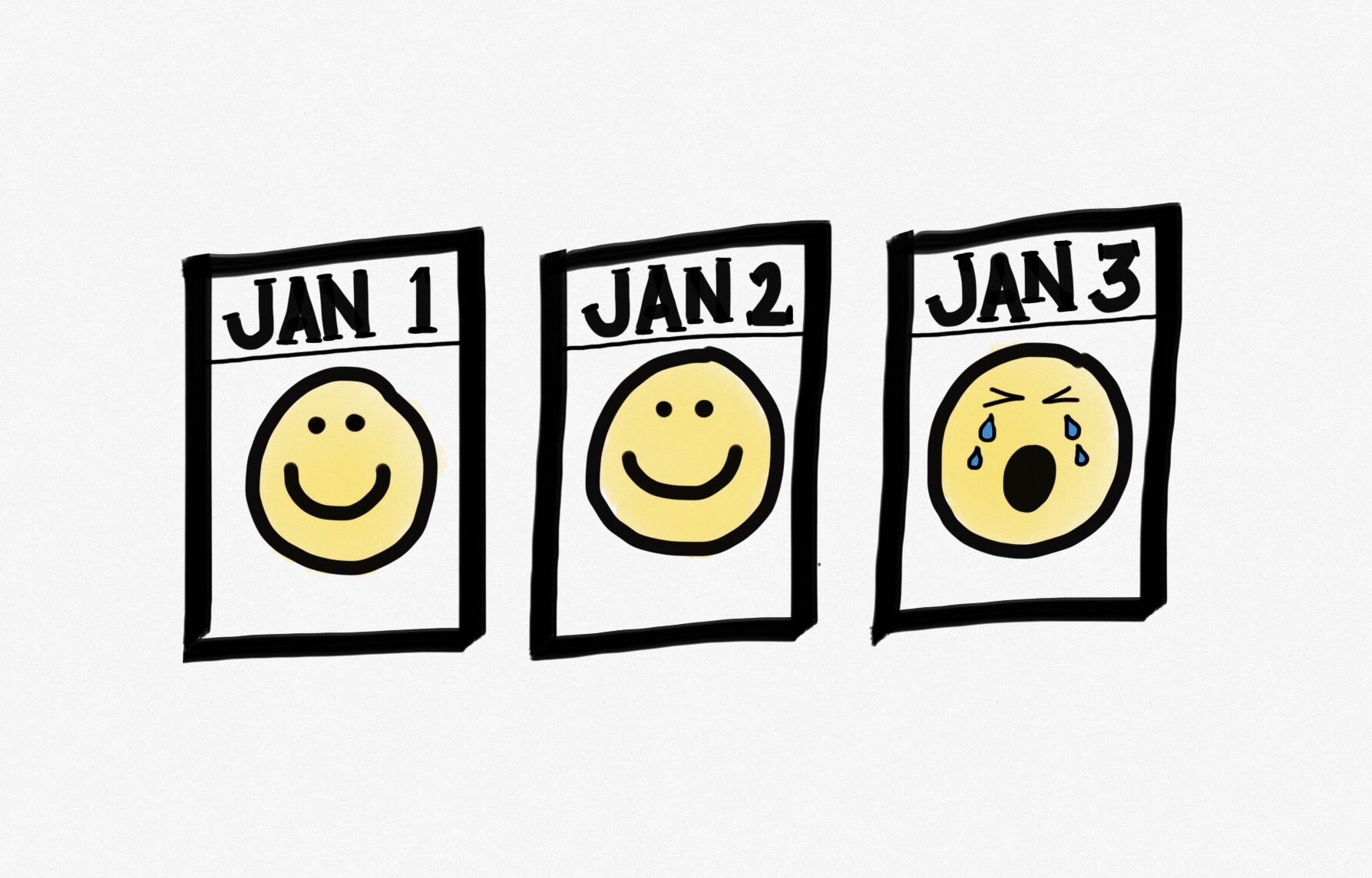 A couple of days ago I was in a liquor store marveling at the sheer number of pinot noir wines that appear to be named in homage to Stephen King. I was organizing a mini photo-shoot (as one does) when a sales associate approached me.

“Hi, can I help you find anything?”

“Well sure: the designs, the names. For instance, do you know I’ve found three wines without even trying that all relate to Stephen King?”

“I’m figuring out the best way to arrange them for a picture.”

I get this a lot.

You could tell this wasn’t anything like a response he was expecting, so he smiled uncertainly and wandered off, surreptitiously watching from behind a giant floor display as I rearranged bottles and took photos from bizarre angles. Once he saw I was finished, he walked back over.

“Meh, really? We’re like two days into the new year.”

“I know, but I already broke my resolution.”

“I’ve never looked at it like that before, thanks!”

Now I have no idea what resolution he’d broken. Maybe he ate a Snickers bar for breakfast. Maybe he sacrificed an elderly chinchilla to an ancient deity. I have to hope it wasn’t anything too serious, but it did get me thinking about the whole resolution thing.

A quick internet search for the definition of “resolution” netted the following entry:

*I added this part but it should totally be in there.

Now I’m not saying I disagree with the concept of resolutions in general. It’s good to set goals and to challenge ourselves to change or modify behaviors. It just seems like many people choose to welcome the new year by deciding to do things so differently that they set themselves up for failure.

And really, is failure a festive way to start a whole new year? I was only partially joking when I said that he was lucky to have broken his resolution so early on. I mean, it really WOULD suck to break a resolution 340 days in, right?

But even better – to me – would be modifying resolutions so they aren’t in a make-it or break-it format. Maybe they’re in a “challenging yourself to be better, to do better, to make incremental changes without setting the bar so high that you instantly fail and then give up” format, instead (only with a shorter name).

So in this particular scenario there IS a try. Sorry, Yoda.

I realize that this is just crazy talk, but WE CAN MAKE RESOLUTIONS AT ANY TIME DURING THE YEAR. We don’t have to wait until New Year’s Day. If you need a specific date, what about your birthday? What about the first day of spring? What about a day that you get together with a few friends to talk about what you’d like to change, and then working together to support each other instead of relying on societal reminders for the first two weeks of January followed by universal amnesia: “Resolution? What resolution? Can’t you see I’m too busy binge watching ‘Sherlock’ while drinking a selection of Stephen King wines?”

I realize that resolutions work for some people, and to those people I say WHY ARE YOU READING THIS INSTEAD OF WORKING ON YOUR RESOLUTIONS? GOGOGOGOGOGO! Hahahaha, you wacky resolution people! Seriously, though, I say congratulations if it works for you. But for many others, resolutions turn into a giant vortex of guilt and failure. I don’t know about you, but that’s pretty much exactly the opposite of how I’d like to start a new year. (Side note: Vortex of Guilt and Failure is my new death metal band name.)

I propose the following:

Just as soon as I finish binge-watching “Sherlock,” accompanied by a nice glass of Pennywise.