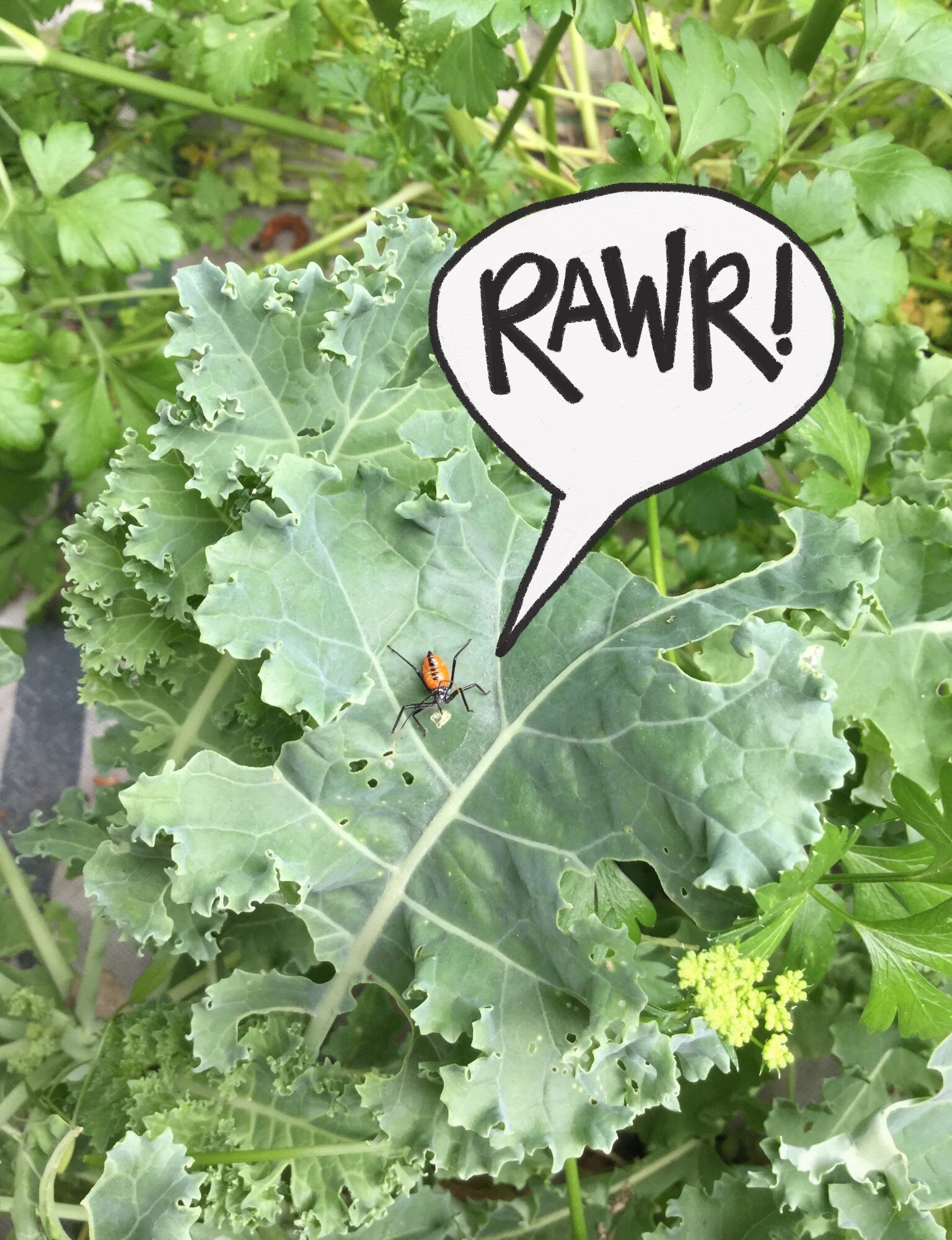 “I’m getting ready to jump in the shower. Can’t it wait?”

“There’s a tiny baby assassin bug in the bathroom.”

“You called me downstairs to see an assassin bug.”

“What on earth made you think I ‘need’ to see ANY kind of bug inside our house?”

“Assassin bugs are a sign of a healthy garden.”

“The garden is OUTSIDE.”

“That’s probably why it’s inside.”

“Awesome. If you find it could you perhaps help it back outside?”

“Maybe it’s too cold for it outside.”

“Hon? Could you come here? I need your help.”

“Do you have something against me showering?”

“No, but this is important. I think I severely injured the little bug.”

“See, I found it again and put it in this container and took it outside to release it. Only I tried to release it over the door and I accidentally put it right into a spiderweb.”

“Then I managed to free it and moved it to the rose bush, which seems like a very friendly place for a baby bug, only I sort of put it into a spiderweb there, too. Now it’s all wrapped up in web.”

Even more silence with extra silence on top.

“How on earth am I supposed to help it?”

“I don’t know. It can’t move, though, because its legs are stuck together with spiderweb.”

“You want me to remove SPIDERWEB – intended to capture bugs – from a tiny bug with legs so small I can barely see them?”

“Are you even listening to yourself?”

“I’ve already tried to help it twice and look where it is.”

“Where are you going?”

“I need to get toothpicks.”

“Look, if you are going to question my methodology you can do it yourself.”

Which is how I ended up performing toothpick-based spiderweb-removal surgery on a baby assassin bug on our patio table one sunny afternoon last autumn.

I don’t mean to brag, but I have a history with assassin bugs.

The first one I ever saw was at a winery in northern Maryland. I’d never even heard of an assassin bug before that, but this bug came to hang out with us, which was totally fine until I noticed the GINORMOUS MANDIBLES OF DOOM. That’s when the phones came out as we frantically tried to identify it.

“Did you SEE the MANDIBLES?”

“Isn’t he the host of Survivor?”

I’ll be the first to admit my eyesight isn’t the best. I like to think it helps me live a more relaxed life because I don’t notice things like proboscises until it’s far too late to do anything about them.

Anyway, it turned out to be a wheel bug, which is a type of assassin bug.

Based on the in-depth research I conducted (thanks, Google!), here’s what you need to know:

They are called assassin bugs because they kill and eat other bugs.

Or so they say.

Now I’m not trying to get all paranoid, here, but for a shy insect they tend to find me A LOT. First at the winery, next at a polling place on election day. I was standing there speaking with a friend when one lurched out of the sky and landed right on my shirt.

It didn’t hang out long enough to get a photo (it was probably on a contract), but I saved this account of the event related by a friend of mine for everyone who cannot IMAGINE me NOT flailing in horror, inviting certain death by proboscis and enzymes and slurping: “When I picked up [daughter] a crazy stink bug/preying mantis hybrid dropped on Mickey’s shoulder. Mickey did not flail, remained calm and did not injure herself or anyone in dislodging said bug. Some may doubt this story, but when I last saw Mickey, she was upright & contemplating arm socks.”

(I left the arm sock comment in there to prove I was the Mickey being referenced in the post. You’re welcome.)

Then, just last week ANOTHER one turned up in our alleged garden:

“How do you even FIND these things?”

“Are you going to take a picture?”

“Don’t get so close, you’re freaking it out.”

“It’s not like I have a telephoto lens on this old mobile.”

I did my best to gently remove as much spiderweb as I could from the tiny bug. All of its legs were stuck together at first, and I’m pretty sure I freed most of them. I’m almost certain I didn’t accidentally remove one, so that’s nice.

Once I finished, I gave it a pep talk and found it a nice, safe, spiderweb-free spot and let it go. I made sure the dogs didn’t accidentally step on it. Or eat it. Or poke it in the proboscis.

Were other assassin bugs watching me the whole time?

Do they know I saved the tiny bug, or do they think I was torturing him?

Am I under the protection of the Local Guild of Assassin Bugs, or am I under surveillance?

Are they here to support me, or are they biding their time before they go all John Cusack in Grosse Pointe Blank?

Either way, at least I’ll hear them coming.

And I’ll have a solid chance of outrunning them.

All photos mine except for the really great one where you can actually SEE the wheel bug. That one’s from Texas A&M AgriLife Extension.