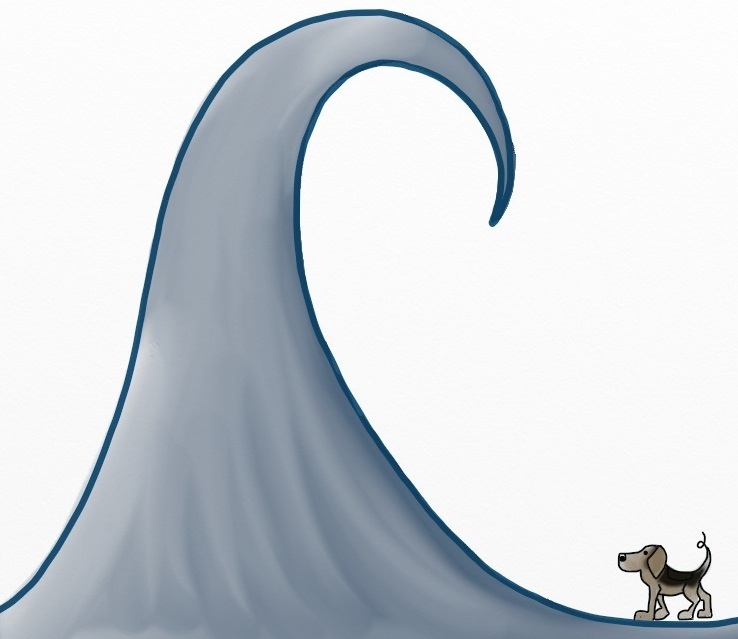 “Why are you looking at me?” Our dogs are pretty clean, overall. They don’t have many chances to get dirty, although in our old house Sophie managed to find stinkbugs in the basement with alarming regularity. She’s smart, though, and soon made the connection between rolling in the latest Eau de Canine perfume and going straight into the tub, do not pass go, do not collect $200.

Our philosophy behind having clean dogs is pretty simple. We like petting them without getting grime on our hands, and we prefer that the house not smell like dogs.

So today was Doggie Bath Day. As soon as I said the word “bath,” Sophie went stone-still and tried to melt into the couch. She knows what that word means – she can even spell it – and she wants no parts of it.

Shiloh followed me right upstairs and into the bathroom, because he doesn’t know what ANY words mean. He watched me hook up the spray hose to the shower head. He observed me getting out a stack of towels. Being a good sport with a bad memory, he even jumped into the tub, wagging his tail.

He endured the first round of water and soap with equanimity. “Hmmm,” I could see him thinking, weighing his options as I lathered up his back. “This doesn’t seem TOO bad. It’s kind of like getting petted, only with bubbles. Odd but strangely compelling.” When I moved on to his head and neck, however, the situation deteriorated rapidly. He went from gentle and amiable to panic-stricken in seconds, even though – and here’s the interesting part – nothing unusual happened. I did not spray gallons of water directly into his eyes or ears. I failed to squirt dog shampoo up his nose. We were not suddenly menaced by a gigantic wall of water. There was no gelatinous ooze monster with teeth like razor blades emerging  from the drain.

“Good boy, Shiloh! Good, good boy. That’s right, you’re a good HEY STOP! NO! STAY IN THE TUB! No no no no Shiloh what are you OUCH! NO! NO CLIMBING ON MY HEAD! COME ON, BOY, GOOD DOG AIIIIGGGGHHHHHH!”

Afterwards, I dried him off, mildly stunned. He even gave me his paws, probably out of sheer embarrassment. I squelched downstairs, dripping, to inform my husband that he was on deck to wash Sophie. I was done.

There were two spots – one on my shoulder, one on the side of my shorts – that weren’t soaked. Muscles I didn’t even know I had ached from keeping Shiloh in the tub. In direct defiance of basic anatomy, I somehow got water in my spleen.

Sure, there are local places that wash dogs, but Shiloh hates them. Despite the attentions of caring, gentle staff who genuinely love dogs, he struggles and wheezes and sounds like Darth Dog to the point that even Sophie feels sorry for him. Last time we took him, she toddled into the washing area and laid down on the rubber floor mat in a surprising show of solidarity.

It didn’t help, of course, but it was still cute. So I’ll wash Shiloh at the house, and he’ll remember halfway through every bath that he hates getting baths, and I’ll get soaked, and he’ll get embarrassed. And Sophie will hope against hope that Shiloh continues to go first, and that we’ll somehow be distracted into forgetting that we have two dogs. At least as far as bath-time is concerned. Dinner time? That’s a whole different story.

And we’ll ALL keep our eyes open for a gelatinous ooze monster with teeth like razor blades emerging from ANY drain.

You know, just in case.

Supporting Local Libraries, One Drink At A Time