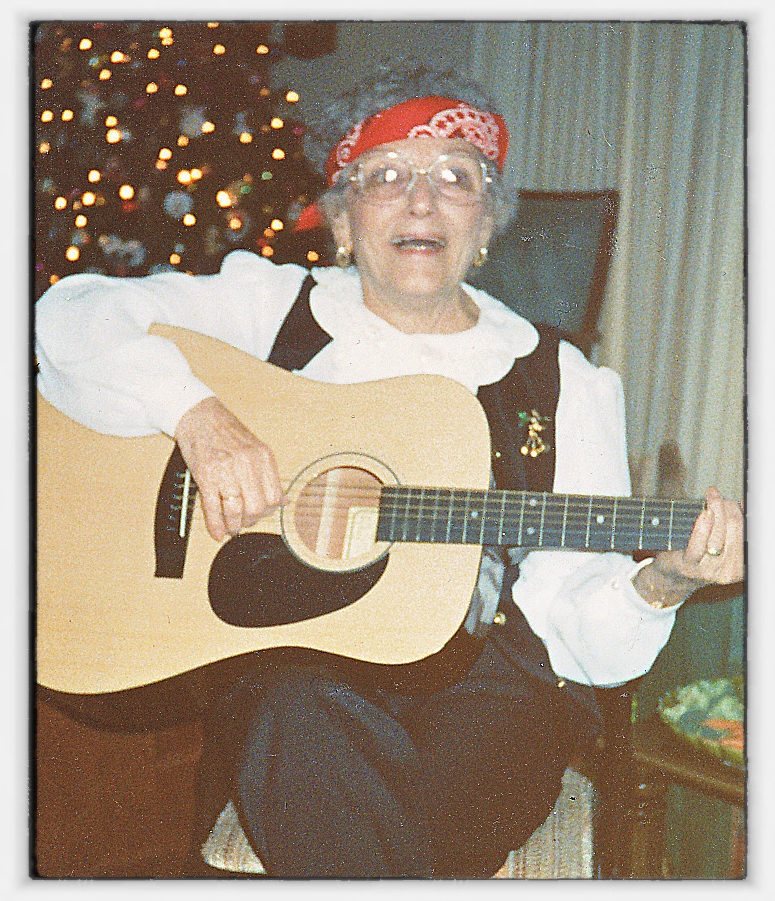 Gran has no idea how to play guitar.

“All ready for Monday?”
“Yes, except I don’t know what we’re doing.”
“That’s because it’s a surprise. You know how to dress. You know when you’re getting picked up, right?”
“Yes, but…you’re not going to tell me, are you?”
“No.”
“Hmmmphh.”

My grandma is pretty amazing. She’s turning 96 on Monday, and she’s still feisty as ever.

When I was little, she made me incredibly gorgeous Halloween costumes. By hand. Holly Hobbie, the Pink Panther, a dalmatian.  She even turned me into Raggedy Anne one year, complete with hand-looped red yarn wig, a dress and an apron.  She couldn’t find white and red striped tights, though, so she put me in white tights and used red electricians tape to make the rings (my mother later confessed that this was her idea). About five minutes into our evening of trick-or-treating she noticed I wasn’t keeping up. Then I asked to be carried. She cajoled and fussed and finally picked me up and carried me from house to house, grimly determined that we finish at least one street. When we returned home, she discovered why I hadn’t wanted to walk: she’d taped the loops around my legs so tightly that I couldn’t bend them.

She laughs whenever she tells that story. Which tells you everything you need to know about gran, really. She’s never taken herself too seriously. Admits when she makes mistakes. And she’s always had a great sense of humor.

“Do you mind if I post some pictures, gran?”
“As long as it’s not the one from the pirate bar last weekend.”
“Deal.”

Playing Yahtzee is a tradition with gran. She has a special dice cup made of cedar purchased as a souvenir on a long-ago family trip. Really that makes all the difference, hearing the little cubes rattle with a hollow wooden sound before they spill out on the table (and often over the edge). She can still beat me 9 out of every 10 games, and will routinely get 3 Yahtzees in a row.  You might think she HAS to be cheating, but she isn’t: she saves that for Scattergories. “Do they have Early Boarding for this flight?”
“I dunno. You want me to ask? Why do we need early boarding?”
“Because I’m old. Tell them I can’t see.”

So I asked the gate attendant and she was happy to let gran board early. We lined up to the side, gran trying unsuccessfully to look feeble. When we finally boarded and were seated, I turned to her and said, “You know, the whole ‘Gran can’t see’ thing might work better next time if you’re not carrying your book.”

“Gran, we’d like to take you out for Mother’s Day. Would you prefer to go to Tersiguel’s or O’Leary’s?”
“O’Leary’s. I don’t think the other would be appropriate at all.”
“Why not? Tersiguel’s is amazing – the food is exceptional, and the atmosphere is lovely.”
“What’s it called again?”
“Tersiguel’s.”
“Oh, I thought you said Testicles.”
Pause.
“Gran, why would we take you to a place called Testicles for Mother’s Day?”
“I have no idea. I never know what to expect with you.”

The day we got married was pretty rainy. The place, which was supposed to be finished, wasn’t, so there were elements of danger everywhere (because simply getting married isn’t stressful enough). The paths to and from the bridal house, for example, were sheets of plastic tarp held down by roof tiles – basically a slip-n-slide waiting to happen.  The grans were being escorted to the photo staging area following the ceremony, and you can probably guess which one was wearing 2-inch gold heels.  The way our friend tells the story, someone announced, “There’s champagne in the bridal house!” and both grans threw off the helping hands of their escorts and starting doing cartwheels and handsprings across the slick plastic and sprinting to be first in line.

Because that’s how my family rolls. They’ve ALWAYS been festive and loved gatherings and having fun. And gran is no exception.

We went to River Country in Orlando one year, and it happened to correspond with a shuttle launch. Mom, dad and I went on the inner tube ride. As we flew off the final slide, we could see gran waving from a bridge overlooking the lagoon. She was smiling and taking pictures. Meanwhile, we could see the shuttle climbing in the sky behind her.  We yelled and gestured, “Turn around, gran! Look! Look! The shuttle!” and she kept waving and laughing. Knowing gran, even if she had turned to take a photo of the launch, she would’ve cut its head off.

“Never in my life did I think I’d see a dog welcomed up on MY couch.” Gran has never really been a fan of dogs, but Sophie The Wonder Dog is different. Once, when gran spent the night, she slept downstairs on the couch. Sophie spent the night downstairs, too, laying on the other couch. Whenever gran would wake up during the night, she’d glance over to see Sophie silently watching over her, and fall back to sleep, strangely reassured.  Ever since then, gran has spoiled Sophie dog to the point where I’ve had to say, “Okay, gran. You can EITHER call Sophie ‘Lardy’ OR you can give her a thousand treats. You cannot, in good conscience, do both.”

Life and How to Live it

She’s quite remarkable, really, and I count my blessings every single day that I’ve been fortunate enough to have her in my life for so long.  She’s taught me – through example – about patience, and strength, and resilience, and joy.  And laughter. And cooking. And unconditional love. Really, she’s taught me a lot about life and how to live it. And isn’t that what it’s all about?

I love you, gran! Happy birthday!

Things That Go Moo in the Night

Objects in Mailbox Larger than they Appear