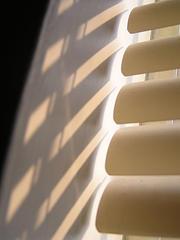 It had been a long week. I returned to my on-campus apartment after work and stretched out on the bed for a nap. I woke up at sunset to long bars of golden light streaming through the blinds, and to the feeling that I wasn’t alone.

He was sitting on the edge of my bed, watching me sleep. He smiled when I woke up, like I’d be delighted that he’d been clever enough to trick a janitor into letting him into my apartment. To this day I think that the flood of outrage and betrayal I felt are what saved me from anything worse. If I’d shown fear, there’s no telling what might have happened.

“What the hell do you think you’re doing?” I said in my coldest voice, jumping up from the bed. He stood up, and I advanced, backing him towards the door. “Get out of here. Now!” I gestured impatiently towards the front of the apartment, raised my voice to a command. He stammered an apology, an explanation, but retreated all the same.

Once the door closed behind him I locked it and collapsed against it in tears. It wasn’t until a month later, when he banged on my door on and off for an hour and then sat there waiting for me to come out, that I was able to call the police, file a report and request a restraining order.

A different apartment, a couple of years later. It’s nighttime. My phone rings. It’s him. “Come to the window,” he says. I don’t want to, but oh-so-quietly I glide across the living room and peek through the blinds. He’s standing outside, backlit by the single flickering light in the alley, peering in. I call the police, but he leaves before they arrive. This escalating behavior along with the incredibly insane messages he’s left on my then-boyfriend’s phone are enough to warrant police action, but he leaves town before anything happens.

Ten years later. The phone rings. I pick it up – nothing. Just like the countless other times – morning, afternoon, middle of the night – that I’ve picked up the receiver to the deceptively simple sound of silence. We can’t change our number – an elderly relative will get confused if we get a new number. We’ve reported it to the police twice, and they dismissed it, so it’s pointless to try again. So I go outside with the dog in our isolated yard, wondering if someone is watching from the trees, wondering if she’s safe, if we’re safe, if I’m safe. Fortunately for me, he was doing the same thing to a woman in a different state. She was able to get a detective assigned to her case. When they finally caught him, they contacted me because my number showed up over and over again in his call records.

Three different men. I knew them all. The first had been a boyfriend, the second a friend’s ex-boyfriend, the third an acquaintance.

Stalking is no joke. It’s not flattering, or funny. It doesn’t show you care. It’s not romantic. It has nothing to do with love.

Stalking is about power, and fear, and intimidation. It’s about isolation, and hopelessness. It’s ugly, and sad, and pathetic.

There are times when I feel ashamed that I’ve been stalked three times, like there’s something that I’ve done to make it happen so often. Like it’s my fault. It’s certainly made me more cautious in my friendships – far more skittish and reluctant to trust. There are other times when I get angry – why me? Will it happen again?

And I’m one of the lucky ones.

This is why the 12for12k charity this month – Jodi’s Voice  – resonated so deeply with me. Jodi’s Voice is an organization dedicated to increasing awareness surrounding the crime of stalking and providing services for an estimated 3.4 million victims each year.

I wanted to share my story not to elicit pity, but rather to inspire others to action. If you or someone you know is in a situation like this, it’s not okay. Document everything. Report what you can. Be strong. Don’t be intimidated into silence.

I’ve shared the smallest taste of what it was like: the way your heart jumps when the phone rings or there’s a knock on the door, the horrible feeling of wondering if someone is watching, the helplessness and frustration of knowing that most of the time you have to wait for something truly bad to happen (to you or to someone you love) before anyone takes you seriously.

How can you help?

You can donate, write a blog post, share this blog post, raise awareness and help spread the call to action. More information is here: http://12for12k.org/jodisvoice/. Thank you.

Supporting Local Libraries, One Drink At A Time